Home Fitness Running Breaking Out of the Comfort Zone

Somewhere on this crazy path of life, it takes an extraordinary opportunity to push beyond our personal boundaries. For me, this moment came the first time I watched the 2017 ÖTILLÖ World SwimRun Championships in Sweden.

ÖTILLÖ, meaning island-to-island, involves 150 teams of two from countries around the world who swim between and run across 26 islands off the coast of Sweden. Running in a special wetsuit and swimming in aquatic running shoes, paddles on their hands and a pull buoy between their legs, athletes cover 65 km of trails and 10 km of open-water swimming in the Baltic Sea by day’s end. To make it even more challenging, rules state that partners must always be within 10 metres of each other and often teams will tether together, particularly in the swim legs.

This race, created back in 2002, is the longest of all SwimRuns on the World Circuit, and is the Holy Grail of the SwimRun world with teams needing to qualify or be accepted based on athletic achievement. Upon further investigation, I discovered that only six different Canadians had ever finished! The fastest all-Canadian team completed this race in just over 11 hours and 30 minutes.

For the last 15 years of my life, I scheduled the same goals and wanted the same outcome. I had won eight World Triathlon Titles and countless National titles. This is a sport I understand and love. I’m good at it and repeat the same hard work and preparation year after year.

Competing in ÖTILLÖ would put me way outside my comfort zone resulting in sleepless nights and anxiety. Not only was the race intimidating, but my partner, Myron Tetreault, was a superior ultra-runner, who had recently placed top 10 at a 100-miletrail-running race at Zion Canyon. My last ultra-endurance challenge was IRONMAN Hawaii back in 1999, but what created the most anxiety was my fear of long, open water swims with no land nearby.

Over the last six weeks before ÖTILLÖ, I was averaging nearly 18 km of swimming and 80 km of running per week. Not only did we need to be in top condition, but we needed to tolerate 12-14 °C water and slippery rock entries and exits. Thankfully, we had Upper Kananaskis Lakes in the heart of the Canadian Rockies to expose us to a perfect training environment, similar to the race location.

Race day was surreal. A nervous stomach and tons of self-doubt plagued me. Thankfully, the Baltic Sea was still, there was no wind and not a cloud in the sky. Experienced athletes cautioned us that the first six hours were merely the warm up, taking us to the edge of the Pig Swim, a 1.4 km open-water, exposed swim and my biggest fear. A strobe light at our exit point aided in our navigation. Surprisingly on entry to the swim, I felt strength and courage. I took the lead position allowing Myron to draft. Having Myron directly behind me created a sense of safety and I swam hard.

We made short work of this nasty swim and focussed more on the last 40 per cent of the race which had less swimming and more running. One of the running segments was close to 20 km long alternating between paved road, gravel and trail surfaces. This run segment was the crux of the race. Teams that were having a good day would run this segment in two hours, while those that struggled would take nearly four and risk not making the cut-off at one of many check points.

Our secret goal was to break 10 hours, but we knew that to reach this goal we’d have to do everything perfectly. Myron was brilliant in creating a pace chart at all check points to meet this dream goal. Surprisingly, we nailed each sub-goal and ran and swam past many teams in the final two hours with time splits equal to the top teams. We crossed the finish line in a time of 9:56:28, smashing the Canadian record.

Today, I see the endurance world in a different way – a view that opens the door to new and more challenging opportunities to keep pushing my personal boundaries and prodding me to explore what Mother Nature has to offer. The sport of SwimRun offers a new spark to an endurance-driven personality with the added bonus of sharing that experience with a partner.

For visual coverage of the race, check out the fabulous footage on YouTube’s ÖTILLÖ Swimrun World Championship 2018 – The Struggle. 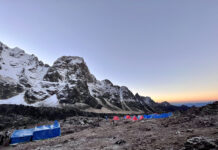 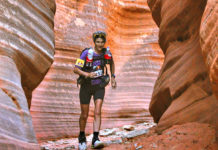 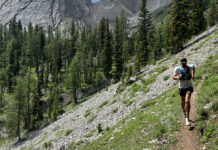