Mountains have long stood as symbols of achievement, challenges to overcome. They are immortalized in art, in mythology and hold us in wonderment at their fortress strength and beauty.

Mountains can be scary, sometimes mysterious, but they are always inspiring.

IMPACT spoke to three Canadians who have connected with mountains in special ways. Here are their stories:

Bruce Poon Tip has helped tether the world together with travel. Poon Tip is the founder and sole shareholder of G Adventures, a Toronto company that began financed on credit cards and is now a $500-million commercial and social enterprise.

Since 1990, Poon Tip has immersed himself into the fabric of hundreds of communities around the globe, connecting with people from the South Pole to South America to Tibet. He sees mountains as pinnacles of goals met.

“For me the mountains mean freedom,” he says. “People get different feelings when they are in remote places. I am a fairly wired guy – but the freedom of being on a mountain is indescribable.”

In 2011, the hundredth anniversary of Roald Amundsen’s expedition to the South Pole, Poon Tip made his own journey to the top of the bottom of the world. “The South Pole was a feeling of accomplishment and great pride,” he says. “For me, it was a spiritual experience, unlike being on top of any other mountain. Even though it was challenging, it was more of a spiritual calling for me. It’s possibly the most remote you could be on Earth, but it was a reflective time.”

“There are so many decisions and incidents that got me to this place in life. I stand on the shoulders of giants everyday and I think most entrepreneurs do. No successful entrepreneur does it by himself.”

Poon Tip has addressed the United Nations about sustainable development. He’s been honoured with business and philanthropic awards and has the distinction of the Dalai Lama writing the forward to Looptail, his business biography of G Adventures. Today, more than 3,000 employees host 150,000 travellers a year in 650 destinations, all on trips designed with local communities and cultures at the heart of the traveller’s experience.

Adventures off the beaten path mean Poon Tip’s family vacation time is in destinations as exotic as the Galapagos Islands with wife Roula and teenaged daughters Jade and Terra.

“The universe is around us and I’m always listening to my calling,” says the Calgary-raised Poon Tip. “I’ve always understood my purpose and my place in the universe. When destiny turns on the radio, only certain people listen.”

Simon Donato’s life defies boundaries. An adventure racer, explorer and entrepreneur, Donato has many irons in the fire. He has searched for lost aerial explorer Steve Fossett, paddled across oceans and raced up and down Scottish highlands. A geologist with a PhD, he’s mapped remote regions of Madagascar and desert rock terrain in Oman with fellow athlete/scientists. And, more than anything, he has connected with the Canadian Rockies in his Canmore backyard. Many of his adventures have ended up on videotape and aired in the television show he used to host, Boundless. Other stories are on the record in his new book — The Boundless Life.

The mountains first called to Donato as a teenager in London, Ont., when he travelled west for ski races in Whistler and Banff, though he rarely ventured off the beaten path. As an adventure racer in his 20s, he got his first taste of navigating big mountain backcountry in Revelstoke, B.C. “These mountain guys annihilated me.”

“I couldn’t fathom the level of expertise they had, dancing around on exposed rock, moving fast,” says Donato. “It was so different than what I was used to and somehow you become that person you used to envy and watch.”

Donato describes living, working and playing in the mountains as beyond special.

“There’s something that calls to you, something beautiful, something aesthetic,” he says. “It’s like being able to integrate yourself with living art.”

There’s also a spiritual side. “Getting out in the mountains on these big runs is like going to church. It gives you that time to reflect — get away from the distractions. The outdoors is guided by nature and what you see and what you feel. I have euphoric feelings when I’m running, when I’m climbing. There is adrenaline. There is a lot of biochemistry going on to enhance my mood.”

Donato is the force behind Stoked Oats breakfast food and runs a conservation non-profit with his wife Chanelle Mayer called Think Like a Mountain. He also leads teams of athlete-explorers through his company Adventure Science. The next Adventure Science project is trekking 100K on King William Island in Nunavut this July, paying homage to the Franklin Expedition.

Sonnie Trotter views mountains from a vantage point few will ever experience. One of the world’s premiere rock climbers, Trotter has a different definition of vertical than just about anyone else. He can turn a towering piece of granite into a day hike in a matter of minutes.

You could describe Trotter as an artist who paints rock faces with ropes and carabiners, plotting the perfect line to reach the top.

Trotter came west from Toronto on a ski holiday with his parents at 15 and knew he had found home.

“When I saw the Canadian Rockies, I was astounded. I thought, ‘Why don’t we live here? It didn’t make sense why we lived in Ontario. When I turned 17, I moved west and lived in my truck. I didn’t even attend my graduation.”

Trotter is a globetrotter, set up in a Canmore, Alta. home base with his wife Lydia Zamarano and their toddler Tatum. Another child is on the way this summer. They also have digs in Squamish, home of epic rock climbing.

That two-base mountain homelife requires “hustling really hard.” Trotter writes and takes photographs. He’s a mountain guide and climbing instructor. He helps his apparel and gear sponsors with product development. Anything for those moments on rock.

“Mountain life means everything to me,” he says. “I lived in my van and truck for so many years because I couldn’t afford to live in a house, but I always wanted to live in a beautiful place. It made sense to put roots down in the two places I love the most, places that have access to climbing.”

Trotter’s passion has been showcased in three award-winning films: The Cobra Crack, If You’re Not Falling and First Ascent. He has hundreds of first ascents around the world, mountain routes no one else had ever climbed. His greatest achievement is summed up simply: “Just being able to live in the mountains and not give up on my dream to climb and play and create every day. It’s living the life I want to live.” 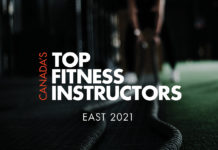 IMPACT Magazine - February 26, 2021
It’s a fact – One in five Canadians experience a mental illness or addiction problem making it the leading cause of disability in the...

⁠⁠ Have you started running more, or for the f