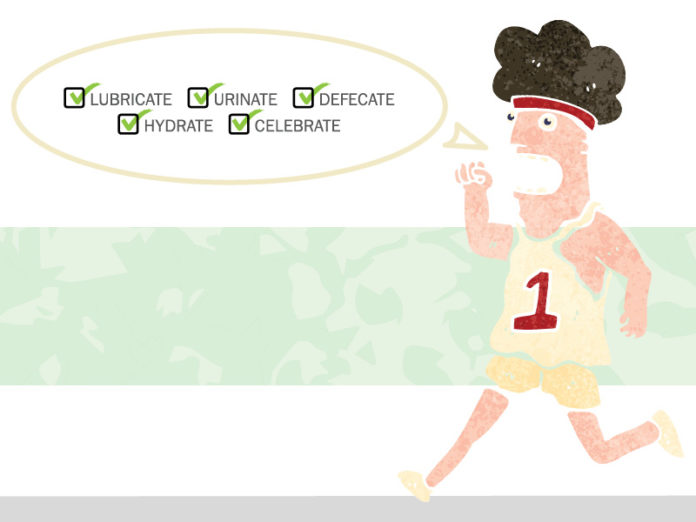 There is no such thing as too much Body Glide. Conversely, not enough glide is a problem, because when you’re thinking about how much your feet, quads and lungs hurt during your first marathon, it’s wise to avoid adding nipple and nether chafing into the mix.

But there’s more to marathoning than ensuring you’re properly lubricated. There are at least forty-two-point-two things that can go wrong in a race, but a careful checklist can avoid mishaps that lead to marathon misfortune.

If you’re traveling, it’s wise to imagine that every airport baggage handler believes you shot their dog. Ensure your carry-on has everything you need for race day, so if your checked bag winds up in a Siberian Gulag, you’re still good to go. Be sure to include two pairs of running socks and your GPS watch charger. My watch got turned on prior to one flight and tracked from Calgary to Victoria, sucking the battery dry.

Check the local forecast, zeroing in on the temperature just prior to the race; a throwaway sweatshirt or Mylar blanket can prevent you from freezing your favourite parts, praying for the gun to go so you can get rid of the goose bumps.

You’ll also want to be familiar with what you’re eating during the race. This is not the time to try out a new peanut butter gel only to discover you’re anaphylactic or it glues your tongue to the roof of your mouth. Scope out the race website and find out what the food situation is en route and plan accordingly.

I’ve found that taking a couple of days off coffee before race day is advantageous. One reason is that being caffeine-depleted the night before, coupled with the carbo-loading food coma, helps you get past pre-race jitters and lets you get a decent night’s sleep. Speaking of which: TWO alarms, plus a wake-up call. Remember Jean-Paul from Seinfeld?

Coffee, followed by letting that mega dose of caffeine help you get rid of digested foodstuffs from sternum to sacrum. Running on empty means blasting past porta-potties rather than blasting the inside of them. Ew.

I’ve done the “get up super early and have the coronary bypass special mega breakfast” followed by hanging around the bathroom for two hours pre-marathon ritual — and I’ve also done the “I’m only having coffee and getting my calories along the way” approach. It’s a personal thing, but both require attention to proper evacuation.

Then it’s only after you’ve done the final wipe that you break out the Body Glide. Don’t be shy. It needs to go everywhere, with extra coats on the nipples.

Five minutes into my first marathon in Los Angeles I witnessed the largest display of public urination ever. There is such a thing as being over-hydrated, especially if you’re going to be spending close to an hour in a corral before the gun. Start a little thirsty with an empty bladder and hydrate during the race and you’ll probably only need a single pee break.

When the gun goes, watch out for discarded clothing. Track pants are slippery and you don’t want to do a face plant before you even cross the start line.

Find a pub that’s a short walk from the finish line. Bonus points if they have a wheelchair you can borrow. 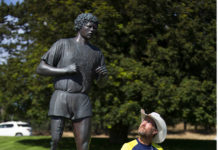 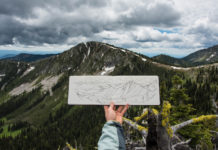