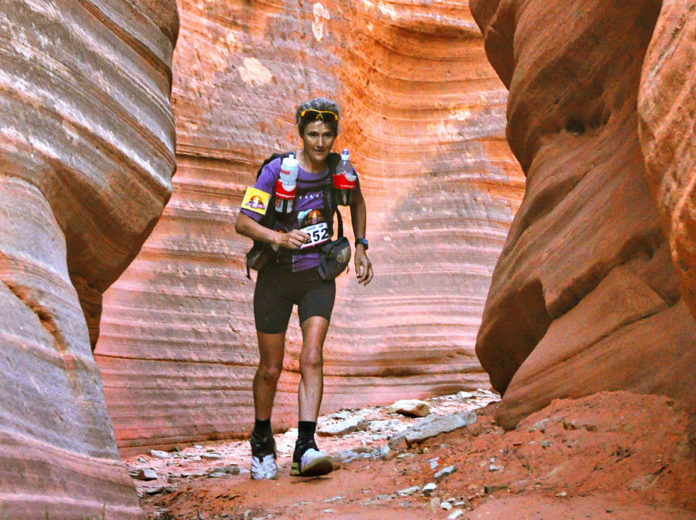 Extreme marathoning and ultra-running are regular occurrences these days. Someone is always running endless backyard loops, from coast to coast, or on all seven continents in a week.

These efforts are fascinating and inspiring, but they don’t actually teach us much about the human body. For that, someone would have to run super long on a laboratory treadmill.

Enter Sharon Gayter. A new study published in the International Journal of Environmental Research and Public Health explores all the data produced by the British runner when she completed 10 marathons in 10 days in the sports science lab at Teeside University, Middlesbrough, England in 2018.

Gayter averaged 4:23:09 per marathon while Teeside University exercise physiologist Dr. Nicolas Berger compiled mountains of data on her effort. This included, among other things, her heart rate and perceived exertion while running, her calories burned and consumed on and off the treadmill, her hydration, her sleep, and her 10-day changes in body weight, fat, and muscle.

An experienced ultrarunner, Gayter was 54 at the time of the study and she clearly knew what she was doing on-the-run. She held approximatley the same pace through all 10 marathons, finishing each between 4:21:21 and 4:24:38. “It went as I planned,” she says rather matter-of-factly. “I thought there would be less than 10 minutes between my fastest and slowest times.”

That doesn’t mean the marathons came easy. In fact, her heart rate increased by five beats per minute in the third hour of each marathon, and by another five beats in the fourth hour. Similarly, her “perceived exertion” rose by about 10 per cent during the third and fourth hours. She held pace, yes. But she had to grit it out in the last two hours.

Nor did everything go as planned. Gayter had hoped to consume a steady supply of fuel as she ran. She tried, but her stomach refused to cooperate. Result? She consumed only water and several handfuls of grapes during her last eight marathons—about 46 calories per marathon. On days one and two, she did a little better, choking down 180 calories and 126 calories.

Another runner might have panicked over the low fuel supply. Gayter had been there before, however, and knew she could continue. “I rarely take carb drinks in my ultras due to the nausea problem,” she admits. “I thought I might be okay on this ‘short run,’ but it just didn’t work out.”

Instead, she concentrated on finding a sustainable pace. She estimates she could have run a single, hard marathon in about
3:30 at the time of her 10/10 challenge. Because she was running considerably slower than that, her body could rely on stored
fat for energy. She burned fat for 67 per cent of the calories she needed. Her daily diet during the run consisted of 55 per cent carbohydrates, 22 per cent protein, and 23 per cent fat.

Gayter began each day with an early-morning breakfast, and then a soup-and-bread snack an hour before running. After each marathon, she consumed a “shake” that included protein, colostrum powder, and a banana. Evenings she ate protein and
a medley of vegetables, followed by apple crumble. Before bed, she had a protein drink.

Immediately after finishing each marathon, Gayter turned to her replacement drink. “That drink was probably my most important recovery strategy,” she said. A daily massage ranked second, though she acknowledged it was mostly “psychological.”

Overall, Gayter burned an average of 3,305 calories a day, including 2,030 per marathon. She was only able to consume 2,036 calories/day. This meant that she lost weight (five pounds seven ounces/2.5 kilograms), body fat (four pounds/1.8 kilograms) and muscle (six and a half ounces/0.18 kilograms) over the 10 days.

During her almost 44 hours of treadmill running, she sought no outside stimuli like TV, music, or books-on-tape. “I am mentally strong, and I can focus on the job at hand,” she says. “Music and people talking to me are a distraction. My mind works in numbers. I focussed mainly on my pace and milestones like every kilometre or 10 kilometres.”

What strategies were most important for Sharon’s success?
Consistency. Each day’s marathon started purposefully late, at 11 a.m., to allow her optimal sleep, and time for breakfast and a pre-run snack. This late start massively decreased the stress on her each morning. Her immediate post-marathon recovery plan was critical to allow her to perform consistently for 10 days. She was sipping her recovery drink even as I was doing the post-run tests, and then she had a massage.

What could Sharon have done better?
Consume constant carbohydrate and protein while running.
We had drinks, jellybeans, sandwiches, smoothies, and protein drinks on hand, but she became so nauseous she was unable to take them. Before her big competitions, Sharon often tries to gain one to two kilograms, because she knows she’s going to lose the weight while racing.

Given Sharon’s steady pace, why did her heart rate and perceived effort increase in her third and fourth hours of running?
Both of those were quite minor and expected. Running for more than three hours becomes uncomfortable. With more energy intake and salt/electrolyte intake, Sharon would have experienced less upward drift in heart rate and effort.

Final thoughts?
Other runners shouldn’t use Sharon’s example as a template for their own ultra efforts. If they consumed as little on the run, their performance would drop off after several hours. You can’t overlook the mental aspect. Sharon has an amazing ability to distract herself without any outside stimuli like music or video.

When it comes to ultrarunning Sharon Gayter has an unrivalled record. The U.K. runner completed her first 100-kilometre race in 1994, winning it comfortably and subsequently representing Great Britain over 25 times and winning many national championship titles. She has competed in over 185 ultra marathons and 114 marathons, including iconic races such as Badwater Ultramarathon, Marathon des Sables, Trans-Alpine from Germany to Austria, Switzerland and Italy, Fire and Ice 250 km, Al-Andalus Ultra Trail and the Grand to Grand Ultra. She has held many world records and at 58 shows no sign of slowing down. Already this year she has completed five ultras and plans to return to the Grand Canyon in September and run the six-stage Grand to Grand again. “This is one of my favourite races and I rarely go back to repeat races, but with a 10-year gap for me I am looking forward to experiencing this again,” she says.

Gayter also has a couple more records to break, she says, one on a treadmill and two overseas. She also wants to do one of the toughest races in the U.K., the Winter Spine, a 268-mile non-stop event with 40,000 feet of climbing. “I entered the first ever edition of this and didn’t finish, hence I have unfinished business there.”

Photography by Dr. Nicolas Berger and Grand to Grand Ultra 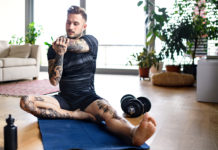 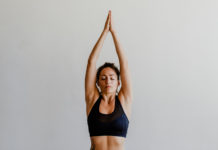 The Physiology of Yoga 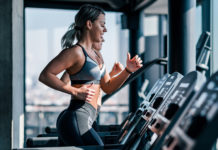