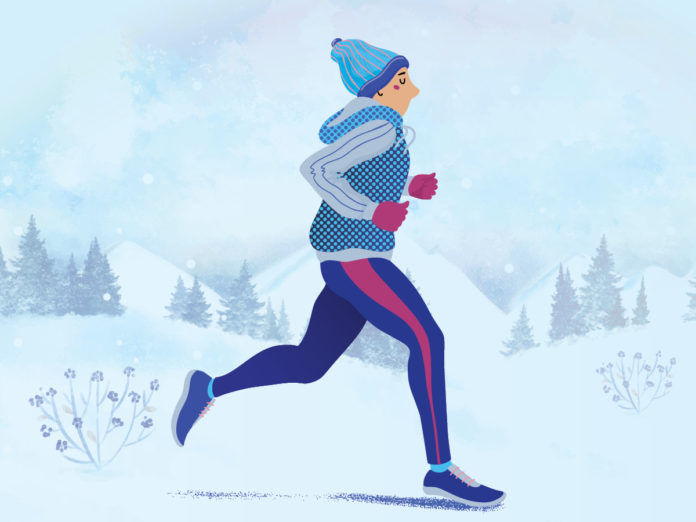 Winter. The cold, short days, and snowy, icy conditions create what is unquestionably the most difficult time of the year to get outdoors and run.

For us active types, this means we have a decision to make: indoors or outdoors? The safe and predictable sweatfest of the treadmill, or the endorphin rush and afterglow cast by the crisp outdoors?

Many coaches adhere to the idea that temperatures below zero equal indoor training. The risks of an outdoor jaunt outweigh the potential rewards.

But what’s lost when we head indoors?

“Replacing the intangibles,” says Scott Mayer, a runner and certified personal trainer. “Running isn’t just putting one foot in front of the other.”

That’s the physical mechanism, Mayer says, but that repetitive movement barely touches upon the real act of running.

“Running is peace,” Mayer explains. “Serenity. Therapy. Spirituality. It’s a relationship. Feeling the earth underfoot provides a sense of grounding and foundation. Most of this goes away when we start running in place indoors.”

Dylan Wykes, a former Canadian Olympic marathoner and co-founder and coach at Mile2Marathon Coaching – who coaches and runs out of Ottawa – clearly understands both sides of the indoor-outdoor equation.

“There is something rebellious about running in really cold weather that can really bring joy and a great sense of achievement,” Wykes says. “There’s that extra barrier to hop over in order to run in cold weather that should absolutely be celebrated.”

Despite the chill, there’s an abundance of research to shows that winter running has many benefits from both a physical and psychological standpoint. Such benefits include burning more fat in the cold, placing less heat-related stress on the body, avoiding Seasonal Affective Disorder (SAD), preventing this seasonal slowdown of metabolism and thereby helping to maintain a healthy weight, and improving overall mental toughness.

When venturing outside, remember the key areas to keep warm are your extremities, because when you’re cold, you start to shut off the peripheral blood supply. Your body redirects the blood to your core to warm you up, so your hands, ears, nose and toes can all still get cold while the rest of you is fine. For this reason, consider getting a light sweat on by warming up thoroughly indoors before you step outside.

Outside, be careful and cautious. Pay attention. Wykes says that he sees more people getting injured during the winter months.

“There is often less variety in running during the winter months,” Wykes points out. “In the summer, runners often explore technical dirt trails, smooth gravel paths, and the usual paved routes, but in the winter, runners are often relegated to the few paved paths that are cleared of snow. There are also quite a lot of injuries due to slipping on ice or running on uneven surfaces such as through uneven snow.”

There’s no doubt that running in the winter is pretty hard core and if done right, it sends endorphins into a frenzy creating a superlative runner’s high. Admit it. These forays often create the most enduring memories of all our outdoors experiences.

Indoors or outdoors? In the end it’s your call.