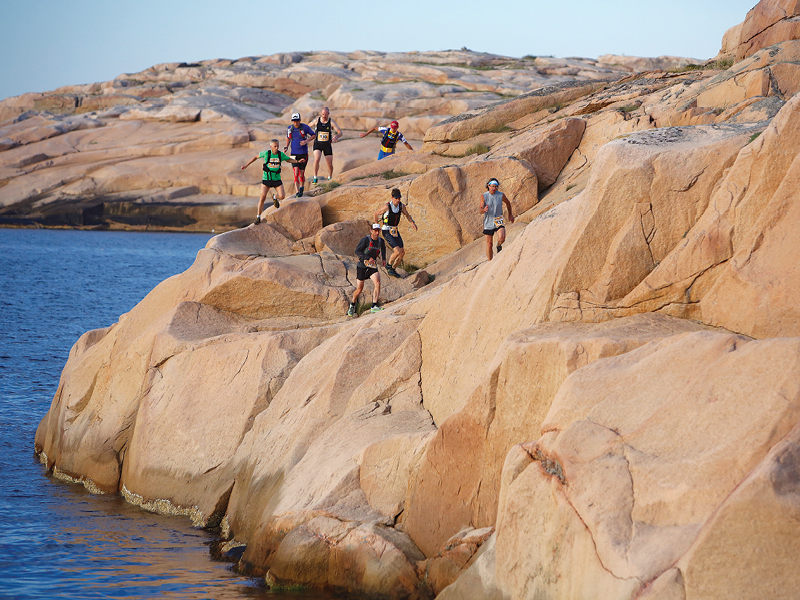 A flight attendant strolling beside me puts her hand on my forearm and says, “Welcome to Sweden, good luck. Have a blessed run.” It pulls me out of my reverie. Blessed run? How friendly are you? How do you remember a comment I made hours ago on our flight from Canada? Who made up such awesome words of encouragement? Turns out the KLM attendant nailed it, except the IcebugX is no ordinary run.

The IcebugX is a festival of feet, a Woodstock by the water, a rock and roll show with a whole lot of sole. The leaders run like rock stars, the mid-pack is the rhythm section and the hikers carry the beat. The inaugural X is a three-day 75K perception shift that measures physical activity, geography, geology and history against the clock.

The IcebugX covers vast tracts of a stunning landscape known as the Bohuslan archipelago, a spectacular setting of islands, islets and rocky outcrops that make up southwestern Sweden. It means running seascapes, taking ferries, stopping at boat crossings and invigorating cold-water plunges at the end of each stage of the race. This is a run designed to keep everyone on his or her toes. It is a race where no single style dominates because its pathways traverse kilometres of wide-open, wind-worn granite, across meadows, along oceansides, deep into tight single-track mossy green forest trails and along country roads to create myriad here and only now moments.

Running an international race without the benefit of adjusting to time zones, is like getting shot out of a cannon. It is a wonderful blur of experiences fueled by excitement, activity and caffeine. Less sleep means the trip is longer, the memories more colourful and increasingly surreal, definitely more fun when they are a collage viewed through a growing haze of sleeplessness. I swear, as the trip progressed, my running compatriots figured “that Canadian guy is nice, but we’re pretty sure he’s high all the time.”

The journey from Canada to the Ramsvik campground in Sweden is epic. The campground is a collection of small two-storey cabins overlooking the Kattegat Sea, an arm off the North Sea. Each cabin is precisely laid out in an impeccably efficient Swedish style. Downstairs is a sitting room, kitchen and bathroom (with shower). Up a ladder befitting Tarzan on the second storey are four cots. I share the cabin with Canadian uber-athlete Dave Cressman. We pick cots as far away from each other as possible. That might be a Canadian thing, maybe just a guy thing?

As we wait for the boat to shuttle us to the start line, there is chatter in several languages. Boom! We are off and within the first 5K I am stunned by the expanse. It makes sense when I learn that 97 per cent of Sweden is uninhabited, leaving uncountable trails over diverse terrain that includes seaside villages, rolling hills, quiet forests, steep inclines and flowering meadows. We literally run the gamut and are coddled and humbled by Mother Earth. IcebugX’s crack management team has arranged a standup paddle board at race’s end so for a few hours I paddle to an outcropping of sunbaked rocks where I rest my body for 20 minutes, storing Vitamin D for Stage 2.

When I gently and elegantly paddle back (OK, I’m exhausted and can barely move) I pull up to the beach and sit among tired, happy, friendly runners. This could be the most incredible part of the IcebugX. I am, after a day, immediately adopted as running family and quickly initiate conversations and friendship with runners and hikers I have never met before, but will remember fondly forever.

Rolling out of bed and climbing down the ladder, Day 2’s 25K leg starts with mediated hopes, realistic expectations, used legs, bright eyes and the same blue, blue skies. To call Day 2’s course stunning would be to rob it of the justice it deserves. Starting at Ramsvik’s campground, zero steps from the dining hall, we count down under the IcebugX balloon and are off down a country road onto granite cliffs that tower over boats passing on the North Sea inlet.

We traipse across fields of boulders then fields of grass. Onward we move through kilometres of forest to dirt roads, to the super-bridge and along a funky boardwalk promenade to cross the finish line and

jump into the harbour’s briny blue waters. We sit in the sun telling stories of our shared adventure: “I’m so tired,” “I got lost” and all the gory stories.

Rolling out of bed hurts. Day 3 begins with two Advil, little hope, beat-up legs and that damn sun in my eyes. I’m mostly kidding. The cacophony of hallå hellos and race strategies abates only when the breakfast hall empties and everyone jumps the bus to the starting line of a quirky Stage 3, a mis-measured 16K (more like 18K) from Smogen’s seaport through the countryside to a ferry berth at Tulboden. Depending on your time of arrival, there is a glorious 30 minute rest/wait/crossing to leave you revived for a 10K burst to the finish line.

Circling the island of Bohus-Malmon, we head over a magnificent granite quarry, through a quaint township, and over a dock through the finish line.

Completing the circle, we leap into the sea. Crawling out and lying on the ground, we remember, recover, rejoice. It is hard to believe it is over, wonderful in the complete sense of the word.

Campers wake and begin to move, the last morning bathed in a beautiful melancholy, a warm reality and a comfortable finality that prevails at the event’s end. Quiet conversations are unhurried, honest smiles plentiful and heartfelt hugs are exchanged.

It feels better than good. It feels natural. Under the early warm sun and Ramvik’s cool seabreeze, the groups begin to peel away. The Germans, Magnus the mountain Swede, the Americans and Canadians all catch the second bus out with nods, handshakes and thanks to those behind.

Years from now, I’ll be running somewhere on the trails and will reminisce about this race. It’ll go like this: “Dude, seriously, I was at the first IcebugX. Run with me a bit and I’ll tell you stories of glory and gain, of misery and pain, of ferry stops and blisters popped, some crazy tales of granite trails, a run along the edge of never that sealed my fate with friends forever.” 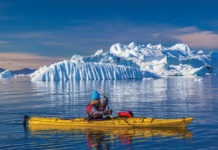 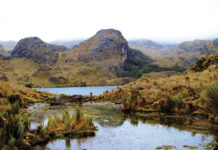 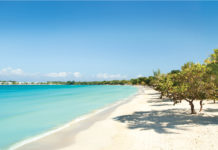