I checked my watch while my hands wrapped around a cup of tea that I got from one of the rest huts on the side of the mountain. It was three o’clock in the morning and I was about two hours into my trek up the mountain.

We were led by a local Bedouin man with his flashlight and the luminosity of the giant cratered moon above.

The dusty path was lined with red stones and lifeless shrubs and the mountain hung over us, as if it were almost taunting us with its monstrosity.

Mount Sinai, a monumental religious site where, according to Christian, Jewish and Islamic tradition, is where Moses received the 10 Commandments from God. Every year thousands of visitors come to trek up and soak up its awe-inspiring views and spiritual dimensions.

Whether one is religious or not, there is no denying the mysterious spiritual aura surrounding the captivatingly large rocks and moonlit pathway to the peak.

Despite warnings to travellers about visiting Egypt, it had always been high up on my bucket list and I was determined to discover the absolute beauty and mystery of the history-soaked country.

Because of the political turmoil that Egypt has been mired in for years, there is a strong military presence, however visitors are treated with respect and kindness. When I was presented with the opportunity to climb Mount Sinai, I didn’t hesitate. I knew I had to do it.

The organized group had planned to leave at 11 p.m., when we would be driving in a seven-van convoy for two hours to the climb site. The van would jerk to a halt at every checkpoint, where our passports were examined by military. As we approached the climb site, we were greeted by a hustle of merchants buzzing with energy despite the late hour.

Their shops overflowing with colourful sweaters and thick blankets strategically placed to draw the attention of passersby realizing they may not have dressed warmly enough for the climb.

We took turns leading the group up the mountain, then falling to the back when we grew tired, just as geese flying. Camels draped in thick carpets and bells lay about the pathway and near huts, occasionally grunting into the brisk air. Mountainous boulders towered around us, framing the star-littered sky above.

We rested every 30 minutes, as the 7,497-foot climb’s incline increased with every step and proved to be a challenge both mentally and physically. We were starting to feel the lack of sleep and cool temperatures, but Mount Sinai is usually climbed through the night to avoid the high temperatures in the day.

The ultimate reward is for climbers to catch the awe-inspiring sunrise at the top. It became a race against time as we noticed how much mountain was left versus the quickly changing sky colour.

Our group continued on feeling more eager with each step up, longing for the break of dawn.

All that lay ahead of us were 400 steps, oddly configured and built by monks inhabiting a monestery in the area.

The climb was a physical test, with some steps demanding the extra caution of scrambling hands and feet.

Adrenaline kicked in as we reached the last few stairs approaching the summit. Our legs sore and hearts beating fast, we were inspired by the promise of one of the most beautiful sunrises we would ever see.

Climbing the last stair to the top revealed a stunning and uninterrupted 360 degree view of the jagged mountain range that surrounded us. Climbers gathered around, setting out mats and blankets to huddle for one of Mother Nature’s greatest productions.

The sky to the east was becoming an ombre of pink and orange, as the hazy sun started to appear from behind the distant mountain in perfect clarity, claiming every dark crease in view.

Looking around at the faded mountains in the distance and peering over the steep cliffs, we felt like we were on top of the world. The sunrise, as promised, was one of the most magnificent things I have ever witnessed.

Cheers filled the air as the full sun came into view, warming us instantly, either by its actual warmth, or with the thought of knowing the sun was present again after a hike in the darkness on hallowed ground. 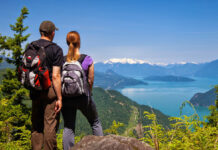