France is the top tourist destination in the world with more than 90 million visitors per year and no wonder, with a cuisine to die for, unparalleled sightseeing and a unique culture. While you’re ‘en vacances,’ consider translating some of your time into cycling, hiking or running through this beautiful country.

As a frequent visitor to France, I specifically look for ways to tie in these activities and find this really enriches my experience. Here’s some advice on how to make a trip to France active and interesting.

There’s nothing better than participating in a race in one of the top cities in France.

From Paris to Bordeaux, every race will offer you a unique perspective whether you’re running along the boulevards of Nice, past the D-Day beaches in Normandy, through quaint villages in Provence or around Roman ruins in Aix en Provence.

Consider Les 20 km de Paris, which begins and ends at the Eiffel Tower or Bordeaux’s Marathon du Medoc, which features local wine at every water station and a course that will take you through vineyards and past the chateaux of famous producers such as Château Lafite Rothschild. Registrations fill up fast, so register first and then plan your trip around the race.

If you’re not up to a race, consider running in a local park such as the Luxembourg Gardens in Paris or joining a guided running tour. I did one that covered about eight kilometres in Paris and gained new information about places I had passed countless times.

Whether you are a novice or an expert, there is a hiking trail for you in France. I’ve done countryside walks/light hiking in the Auvergne region where it was relatively flat and lovely – with lots of cows out in the pastures – as well as more challenging hikes near the cliffs of Étretat in Normandy.

Some of the most scenic hiking is in the French Alps where soaring peaks and valleys create a breathtaking landscape. One thing I’ve learned about hiking is if you’re asking for advice, be really clear about your abilities and know your limitations! I ended up on a hike in Chamonix that was much too difficult, after following local suggestions!

France is a top cycling destination and host to the world famous Tour de France. Bike tours are popular across the country with most averaging 40-65 kilometres a day. However, there are stops along the way to take a break, visit sites and have a picnic. I’ve done tours in Burgundy and the Dordogne/Bordeaux region where most of the cycling was on pathways, away from traffic.

Both the tours took place in the heart of wine country so of course there were ‘dégustations’ (tastings) at prestigious wineries such as Chateau Lynch-Bages in the Pauillac appellation of Bordeaux.

If a week-long tour is not an option, consider a day tour in a city or rent a bike and go on your own. I’ve taken an evening bike tour several times in Paris. It’s great if you’re new to the city or enjoy cycling and want to see fantastic architecture and historical monuments. My tour included popular areas like St. Germain de Près, Ile Saint Louis, Pont des Arts, the Louvre Museum courtyard and Place de la Concorde. The ‘pièce de la résistance’ was the boat tour along the Seine accompanied by a few glasses of wine. It is one of my favourite experiences in Paris.

So far, I’ve made more than 30 trips to France and each one has incorporated running, biking, and cycling. It’s been a wonderful way to see the country in a different way than simply sightseeing. Incorporating these activities has definitely enhanced my vacations and certainly made them more memorable.

Editor’s note: Janice actually wrote this article while on a nine-week trip to, where else, France! Where to Run, Hike or Cycle in France

1. Paris
Running along the Seine River is a good option, particularly in the early morning. You’ll have less traffic and more impressive views of La Conciergerie, Notre Dame, Place de la Concorde, the Eiffel Tower, and other famous monuments in Paris.

2. On the outskirts of Paris
Bois de Boulogne or Bois de Vincennes are also popular for runners.

3. Nice
The picturesque Promenade des Anglais makes for an easy run along the Mediterranean.

4. Annecy
The shoreline of Lac d’Annecy is perfect for a run with the French Alps as a backdrop. There are dedicated bicycle and walking/running paths here that you can use.

5. Cassis
The three calanques (inlets) near Cassis can be challenging but well worth the effort for the spectacular views of the Mediterranean. You can hike all three in one day over a 4-6 hour period.

6. Étretat
An easy hike in Normandy that takes you to the world-famous white cliffs similar to the cliffs of Dover, UK.

7. Chamonix
There are numerous hikes starting at the main town of Chamonix in the French Alps or further up at the Auguille du Midi. You’ll get stunning views of Mont Blanc.

8. Ardéche Region
This area has the Ardèche Canyon as well as Pont d’Arc where you can kayak under the arc.

9. Luberon Region
Consider taking a trek from Gordes to the Abbaye de Senanque, especially during lavender season. The photos of lavender in front of the abbaye have become world famous.

10. Loire Valley
This is one of the most popular areas for biking tours. The route is flat and allows you to visit some of the most famous chateaux such as Château de Chenonceau which spans the River Che and Chateau de Villandry, known for its elaborate gardens.

11. Canal du Midi
Do consider riding along the Canal du Midi , a 240 km canal which connects Toulouse to the Mediterranean. You can go as far as you want and most of the cycling is on pathways. Bicycle rentals are available in such towns as Carcassonne and Beziers.

12. On Your Own
For independent biking, most major towns have bike rental shops offering road, mountain and e-bikes. 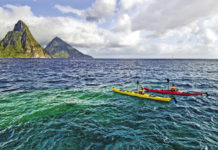