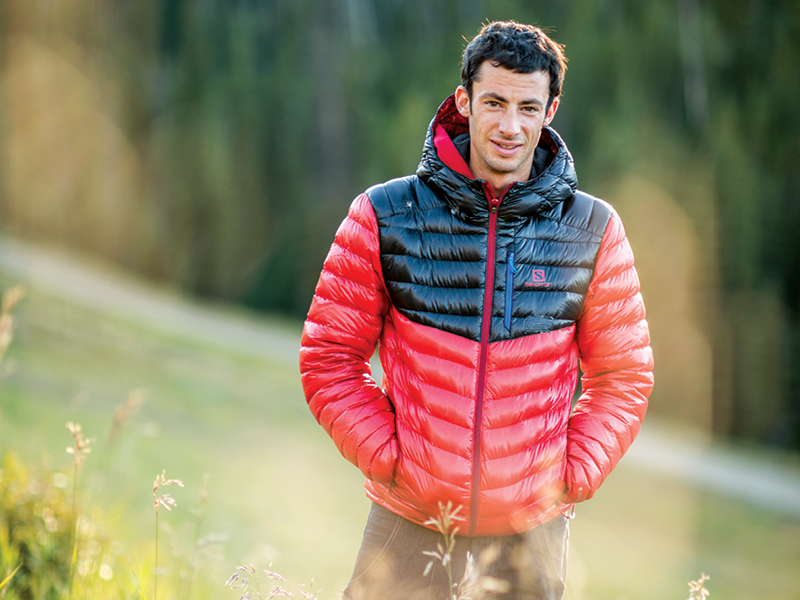 Clad in talus, snow fences and bare rock, Montana’s Lone Peak looks more suited for skiing down than running up. But the 300 people who start in the dark this September morning look underdressed for skiing. Their mission for the next two days is chasing Kilian Jornet Burgada up and down this mountain to see who can capture second place.

Jornet, 27, is the world’s foremost endurance athlete: a running, skiing, mountain man with a gentle smile and the ability to race trail like no other human. A Spaniard, Jornet is a seven-time Sky Running world champion and certainly at home on the rocks and ridges of the Rut. He holds countless records running up mountains such as Kilimanjaro in Tanzania, Denali in Alaska and he is planning an assault on Everest.

At the Rut, the vertical kilometre presents a simple proposition: run from base area to the summit on a course that begins on a road, flows uphill on downhill bike trails then crawls onto the exposed east shoulder. Jornet clocks 46 minutes, a modest 14 seconds faster than runner-up Rickey Gates and about half the time it took me to complete the course. The 50K course pushes further, counting two sections so narrow that the course directors installed hand lines. The next day, Jornet wins the ultra in 5:09, 11 minutes faster than American trail running icon Sage Canaday.

After two days of gruelling racing, you would think the last thing a runner wants to face is a mechanical bull. Yet, here is Jornet, costumed in a felt policewoman’s outfit and blue wig, taking hold of the cowhide and rubber handle. Half a minute later, one violent swing casts him off. Jornet comes up smiling, the athletic grace that propelled him up and over Lone Peak twice in two days evident even in the lazy glare of nightclub lights.

Don’t let the costume fool you. Between the trail shoes and the wig is a man of contrasts. Before and during the race, he’s focused on running — there’s a determination on his face. But after the vertical kilometre, his playful spirit emerges when he asks a group at the summit of Lone Peak, “Who wants to run down?” Because of rockfall risks, the course directors nix this plan and all head down on the tram. Once at the bottom station, he asks again: “Does anyone want to run down now?” And when nobody volunteers, he tightens his shoes and heads off toward the base area.

Kilian Jornet travels the world and competes almost every weekend on skis or in his Salomon trail shoes in the most spectacular settings. He has no coach, no formal training regimen, just pure passion for being in the outdoors. He runs for fun, for the joy of mingling with nature.

When asked about his training, Jornet explains: “I really like a polyvalence, to do different things in the mountains every day: a vertical kilometre, a 100-mile race and a technical summit, or a steep ski downhill. In each you find different feelings, meet different persons, have different opportunities to learn and improve. And I think racing is a perfect place to train and to improve.”

His perspective on racing shows wisdom gained from years in the mountains. During the Hardrock 100 in Colorado last July, Jornet had amassed a decent lead with about half the race to go. Instead of forging ahead, he waited at the aid station for the second place finisher to arrive so he’d have someone to talk to as they continued along.

Jornet’s balance carries over into his non-traditional approach to nutrition. In his first book, Run or Die, Jornet catalogues a cornucopia of trail food: “At Sierre-Zinal, there’s a large plateful of gnocchi and cookies soaked in tea.” When he crossed the Pyrenees, covering more than 850K and nearly 40,000 metres of vertical gain in 10 days: “Two wonderful rolls filled with tomato, ham and goat cheese . . . cookies and energy bars are the desserts to round out our meal.”

When he smashed the speed record on Kilimanjaro, Jornet powered his seven hour, 14 minute effort with an evening prior meal of “bowls of cream carrot soup and huge plates of pasta.” Jornet describes his diet as fairly normal, with “mostly organic food and from the season or the area I live.”

And in keeping with the large jar of Nutella spotted in the photos surrounding his 2014 speed record on the West Buttress of Denali, he mentions, “I like chocolate and sweets and if you train a lot of hours you can burn it all!” On his legendary mountain assaults, he relies on his own body fat to fuel his efforts.

Ascents of Kilimanjaro and Denali are part of Jornet’s Summits of My Life project, which could also be categorized as a total routing of the speed records on the highest points of each continent. His time of 11 hours, 48 minutes on Denali cut nearly six hours off the previous best. In total, it was faster than the previous record for just the ascent.

In December, he attempted a solo mission to the 6,960-metre summit of Aconcagua, Argentina — 90 km/h winds driving him away from the highest peak in the southern hemisphere — and now it’s off to Everest.

In arenas that have never seen such speed, his approach raises safety concerns, but Jornet provides characteristic clarity: “Sometimes going light can make you safer because you will spend less time exposed in a dangerous area or in bad weather conditions, but on the other side, if you have a problem or small accident, you don’t have the tent or clothes to make a bivi and stay there . . . it’s always a balance of compromises.”

A balance of compromises, indeed.

In a recent interview with a British TV station, Jornet acknowledged the danger of his exploits but insisted the chances he takes are well calculated.

Back at Big Sky, the line for the mechanical bull stretches over to the dance floor where Jornet and the rest of the Salomon team celebrate their hard work. Later, Jornet reflects on the compromise for his next visit to Montana: “I still have blisters on my adductors from the bull hair! Next time I will take jeans instead of a skirt.”