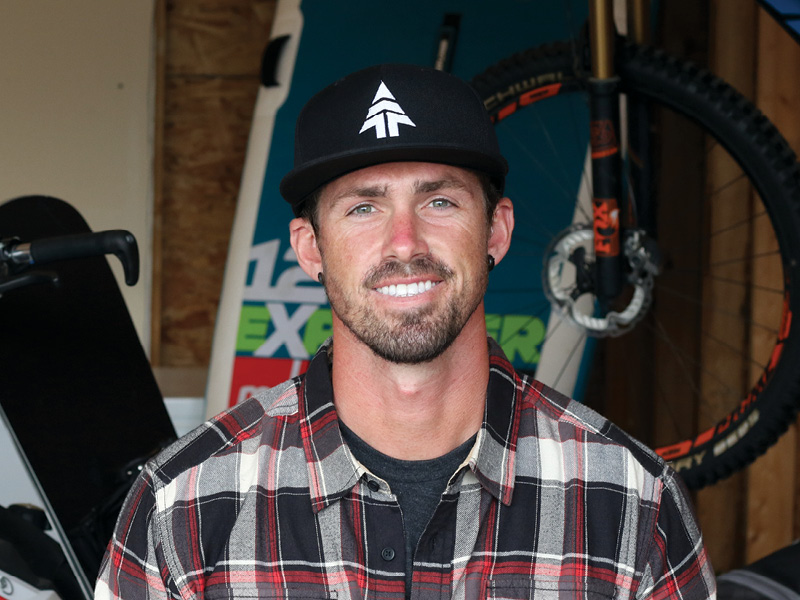 Tough to picture, really. Ricky Forbes stuffing his frame – all six-foot-five and 240 pounds – into a suit, then slouching into a cubicle and immersing himself in the world of finance.

This unlikely scene actually took place for an entire year before Forbes, presumably tearing off his tie and howling like a wolf, decided he’d had enough.

“I realized I made a mistake,” says Forbes, chuckling. “I had this realization that my passion lied in the outdoors and adventures. At the time, I was 23, 24, and if I was going to pursue what I really wanted to do, that was the time to do it.

And rushed outside, where he’s remained ever since.

Forbes is one of the stars of Tornado Hunters, originally broadcast on CMT Canada. The popular reality show has recently been picked up by Netflix.

“I’ve never felt more alive than when I’m storm chasing,” says Forbes. “When you get to be a part of that in person, it’s absolutely massive, so surreal. It’s really hard to believe your own eyes. You can feel it, you can smell it.”

This is what Forbes does. He’s no bystander. “I love being out in nature,” says the 31-year-old resident of Saskatoon, who is a partner in the social media agency Blue Moose Media. “The adrenalin part is a large part of it – but even more is the adventure, the exploration and pushing ones boundaries.”

Growing up in small towns, Forbes had been a regular at the arena – “If you didn’t play hockey you didn’t really have any friends” – but it wasn’t just for puck-chasing. He would convince his parents to drive to the rink so he could fill the truck box with snow that had been dumped outside by the Zamboni. He’d take it home and shape it into backyard ramps.

“Every day after school, we were building jumps and hurting ourselves and heading to the hospital, then trying it again,” says Forbes. “It never got boring. There was always more to discover, more to do, more to push yourself.”

After escaping the office job, he worked on drilling rigs, which made sense – outside, good dough, plenty of days off.

“I was really pushing my limits,” says Forbes. “I got into all sorts of sports I’d never done before – rock climbing, white-water kayaking, ice climbing – trying to get the most out of life.”

One day in 2012, he met Greg Johnson, who invited him to come storm chasing. Travelling through Kansas and Nebraska and Oklahoma, they ran into a whopper of a tornado. More than a kilometre wide. “All of a sudden, I realized the Boogey Man is real,” Forbes says. “An absolute life force. It sounded like a jet engine. It was terrifying to watch. An adrenalin rush the whole time.”

From that experience, Tornado Hunters, with regulars Johnson and Chris Chittick, was born. The show ran for two seasons.

Forbes, like everyone else, has a bucket list – base jumping, big-wave surfing – but as he grows older he finds himself less inclined to get hurt. Then again, last year he ripped up his left knee in a snowboarding mishap and, weeks later, broke his right foot in a dirt-bike spill.

Healed up – for now – Forbes is preparing for another season of storm chasing and outdoor adventures.

“I’m not trying to be dark or cynical or be a cowboy about it,” says Forbes, “but this is what we love to do.”