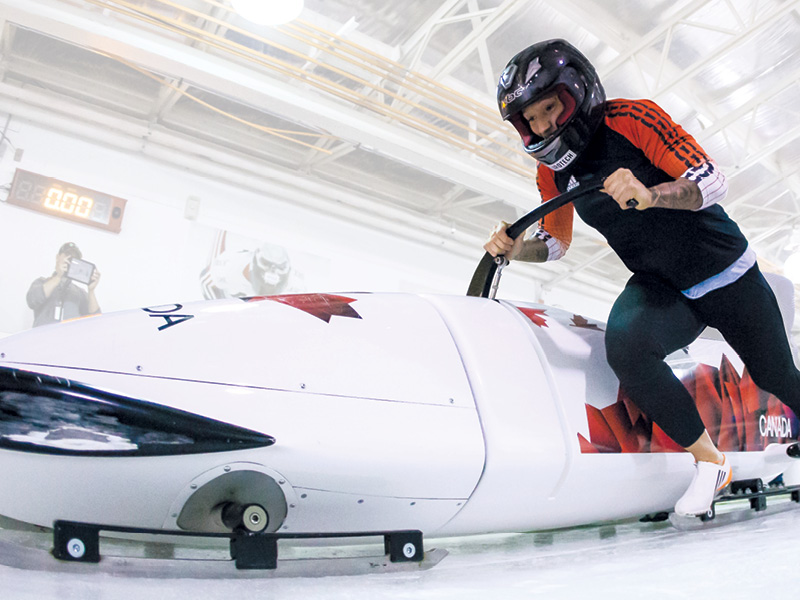 In the bobsleigh start hut at Canada Olympic Park for national team selection races, Kaillie Humphries stands like a general, arms crossed, set to lead her helmeted stormtroopers into battle.

Humphries is Canada’s pre-eminent bobsleigh pilot, a position that requires the strength and power of a sprinter and the skill of an F1 race car driver. She needs the ability to see far down a track as she catches up with the future at 130 km/h. She uses a touch so deft that micro-movements on two rope pulleys will guide her carbon-fibre sled along the ice highway faster than just about anyone in the world — man or woman.

Humphries has won the last two Olympic gold medals in women’s bobsleigh and these fall races in Calgary and Whistler are a formality on one hand and her Everest-to-climb, on the other.

In the two-woman competition in Calgary, Humphries and brakeman Melissa Lotholz were almost two seconds ahead of the field — light years by bobsleigh standards. A day later she was in the cockpit for the first of a pair of selection races against four other all-male Canadian teams, striving to qualify for a second season competing with, and against, men. While she can drive a bobsleigh as well as anyone, Humphries faces the reality that every man in her sport is bigger, heavier, stronger and faster than her. No matter how explosive a sprinter she is, physics and biology are working against her push-starting the 200 kilogram sled. When gravity kicks in, the weight of the crew is a factor in how fast the sled is pulled down the track and she’s the lightest in the field. When it comes to competing against men, the cards are stacked against her.

“The goal is to defend the Olympic gold medal for a third time in 2018 in Korea,” she says. “The new goal is that I would love to be able to compete and win a medal in men’s four-man. It’s a goal that I believe is truly possible. The bar is higher, but I believe I have tools in my tool belt to deal with that.”

Stephan Bosch, head coach at Bobsleigh Canada Skeleton, says Humphries faces a huge challenge to race men’s World Cups this year and be competitive. Only one Canadian sled will race in Europe prior to Christmas with a second spot opening up in the New Year. Whether it’s Humphries, Justin Kripps or Chris Spring at the helm for Canada is still to be determined.

“Women are smaller than men and on the way down, it’s a gravity sport, there’s less weight and she’s slower (sprinting at the start) than the men, so it’s hard to make up the time,” says Bosch. “She is really focused, professional and puts everything together until things are right. I don’t see any other person who is more dedicated than her.”

After the 2014 Olympic gold in Sochi, Humphries did not have a banner season last year. She and American Elana Meyers Taylor each drove a four-man sled in World Cups last season. Humphries’ top placing was a respectable 15th in Calgary. On the women’s side, she failed to win a major race for the first time since 2008, placing second once and adding three World Cup bronze medals.

“For Kaillie to get anywhere near the top 10 is huge with the physical disadvantage,” says Helen Upperton, a Vancouver 2010 silver medallist, adding the only practical way forward is for women to have their own four-person event. “She needs to be lighter and faster to race against women and heavier to compete against men. As much as advancements are being made for women in our sport, there is still a long way to go. I think Kaillie’s message for girls is, ‘Don’t let people tell you what you can or can’t do.’ ”

Humphries counts on veteran pusher Lacelles Brown on her brakes, along with Luke Demetre and Dan Sunderland in her men’s crew. “What we’re trying to achieve and the barriers we’re trying to break down is to show that a high-performance athlete is a high-performance athlete no matter the gender,” says Humphries. “Sliding and driving and pushing with the men in 4-man has increased my athleticism. I’m faster and more explosive than I’ve ever been.”

What she does better than most athletes is communicate through pure physical presence. With the flowing locks of Rapunzel on one side and her head shorn military close on the other, she is at once an image of feminine beauty and an intimidating force. She is sprinter fit, her physique a canvas for tattoo images and inspirations of important people and moments in her life. Ink of her family, her Olympic triumphs, a Native American pin-up girl, a guardian angel and dozens of other designs walk with her on every step of her journey. When she pulls on a speedsuit in the start hut it’s hard for the competition not to notice.

I’m a bit more rough and tough than most girls, but I’m around rough and tough guys, big intimidating guys. At the same time, that’s not who I am inside. That’s where I have to play both sides,” Humphries says. “I’m learning to embrace that badassness that comes with being a trailblazer. It’s been hard (treading beyond the gender barrier.) Even people on my coaching staff don’t believe it’s possible. Whether people are jealous, whether they hate or whether they honestly don’t believe — or they grew up in an era where it wasn’t possible to believe a woman can do anything. I believe.”

Faith only gets one so far. Humphries is a machine in the gym, building explosive sprint power with a steady diet of squats, deadlifts and track sprint work. She sweats for three to seven hours a day. Put 160 kilos on the bar next time you are in the squat rack. Try 105 kilos for a power clean. Those are Kaillie numbers.

She’s quick to point out that being a strong woman has “its benefits and drawbacks.” In the dating game after her five-year marriage ended, Humphries says she’s “trying to find a dude that can A: keep up and B: that isn’t intimidated and can lift more than you.”

“I’m probably an average size girl, but as Rhonda Rousey would say, ‘I’m not a do-nothing bitch,” Humphries laughs. “I train to be the fastest, strongest, fittest, most explosive I can be. I want to be that extremely intimidating woman but I think my character, as a woman, is very different. I’m shy, a bit of an introvert.” Humphries has also dipped her toe into mixed martial arts training, but says a fight career, like Rousey’s, is not in her future.

Humphries caught the Olympic bug early. After watching Mark Tewksbury win a gold medal in the pool for Canada in Barcelona in 1992, her dreams began to take shape. She played every sport she could get her hands on then plunged headlong into alpine ski racing. Two broken legs knocked her off the mountain and into bobsleigh when she was just 17.

“Sport has always been a way for me to express myself. Sport has been a way to let out my fears, anger and frustrations; a way to realize my goals and hopes and dreams,” she says. “It’s taught me so much about leadership and respect and being humble. It’s taught me the physical side of living a healthy active lifestyle. It was my time to be me and show the world who I am. It’s fitting it turned into my whole entire life … but I know there is still a lot of life to live.”