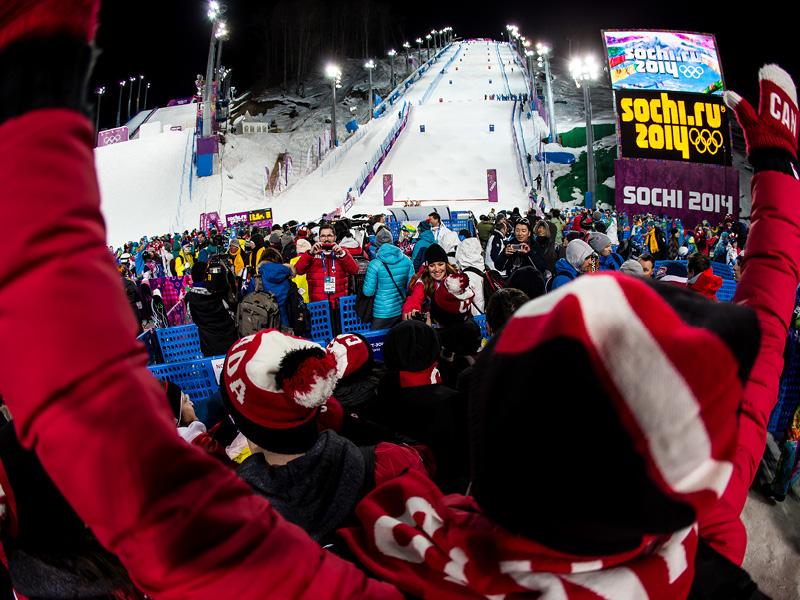 Last March, McMorris suffered a devastating injury boarding in the backcountry when he landed a trick in trees. He broke his left arm and jaw, fractured his ribs and pelvis, ruptured his spleen and suffered a collapsed left lung. But the Regina native has sent notice that he’s ready to improve upon his snowboard slopestyle bronze medal from Sochi by winning a Big Air competition in Beijing in November.

Ever since her debut in 2010, Thompson has been one of Canada’s brightest stars. She claimed gold in Sochi, defeating teammate Kelsey Serwa for a 1-2 Canadian finish. Thompson, ranked first in 2017, is one of the most successful ski cross athletes in the world, and will be a key component for the alpine team.

Simmerling made history at the Rio Games by becoming the first Canadian to compete in three different sports in three Olympic Games. She won a cycling bronze medal in Rio, and competed in alpine ski racing at Vancouver 2010 then ski cross in Sochi.

Inspired by the efforts of Alex Bilodeau at Vancouver 2010, Kingsbury four years later shared the podium with Bilodeau in Sochi and has since become the most dominant moguls skier on the circuit and the winningest male moguls skier in history. The explosive skier has his sights set on gold in Pyeongchang.

Bowman made his Olympic debut in Sochi, placing fifth, and has become one of freestyle skiing’s must-watch athletes and a key member of Canada’s contingent in Pyeongchang. At 17, he had to overcome cold urticaria, a disorder where hives or large welts form on the skin after exposure to cold.

Boutin is off to a roaring start this season, tallying a couple of World Cup gold medals recently in China. Boutin also won three individual silver medals and a silver and bronze in relay. In 2015, she was aptly named Speed Skating Canada’s Rising Star.

The 33-year-old Hamelin, owner of four Olympic medals, three gold, is one of Canada’s most accomplished male winter Olympians. The back-to-back gold medallist and reigning world champion will be competing in his fourth Games and is always a medal threat.

Bloemen, a dual Dutch-Canadian citizen, holds the 10,000 metre long track world record and set a world record in 5,000-metres in Salt Lake City in December. Bloemen is on top of his skating heading to Pyeongchang.

Blondin made her Olympic debut in Sochi, four years after jumping from short track to long track. Competing in mass start, which is making its debut in Pyeongchang, Blondin is a three-time medallist in the discipline.

Canada’s beautiful ice dance duo picked up where they left off and are back to producing tremendous results after a two-year hiatus from competition. The silver medallists from Sochi won gold at Vancouver 2010. They are three-time and reigning world champions competing in their third Olympics.

Osmond had a strong 2016-17 season, capped off with a silver at the world championships after recovering from injuries. Her elegance, strength and hard work is on display every time she takes the ice. She was a part of history in Sochi, being a member of the silver medal winning Canadian figure skating team and is a medal threat for the 2018 Games. ⇑

Maybe we should call her Superwoman, seeing as how she has gone from running hurdles to bobsleigh, speeding down a new track, albeit slightly colder and much faster. George is competing in her third Olympics, but her first Winter Games.

The Calgary resident is the back-to-back gold medallist from Vancouver and Sochi, and represents one of Canada’s best opportunities for a medal in Pyeongchang. Her efforts in Sochi saw her recognized as the 2014 winner of the Lou Marsh Award as Canadian athlete of the year.

Since her debut in Sochi, Ramsay produced her breakthrough campaign in 2015-16. To show that season wasn’t an aberration, she won four medals (one silver, three bronze) at the 2017 World Para Alpine Skiing Championships. This rising star is poised to contend for some hardware in Pyeongchang.

Marcoux is a favourite in every para alpine event for men with a visual impairment. At just 16, Marcoux won gold in the giant slalom and bronzes in both Super G and downhill. He also won four of five events at the 2017 Para Alpine Skiing World Championships and will be looking to add to his collection.

Hickey, 19, is a natural athlete. He was a part of the wheelchair basketball team in Rio, then quickly made the transition to sledge hockey and will be representing Canada in his third Paralympics. Hickey won gold with Canada in Turin, Italy, at the 2017 International Para Hockey Tournament.

The former wrestler turned her attention to biathlon after a devastating arm injury ended her wrestling aspirations. Young is one of Canada’s most exciting athletes in cross-country skiing and won a silver medal at the season-opening Para Nordic World Cup in December.

Arendz is a man on a mission heading to Pyeongchang, which will be his third Games. He won five medals at the 2017 Para Nordic World Championships, and is hoping to improve upon his already impressive Sochi efforts, earning two medals in biathlon.

⁠⁠ Don’t let a few rain drops deter you from