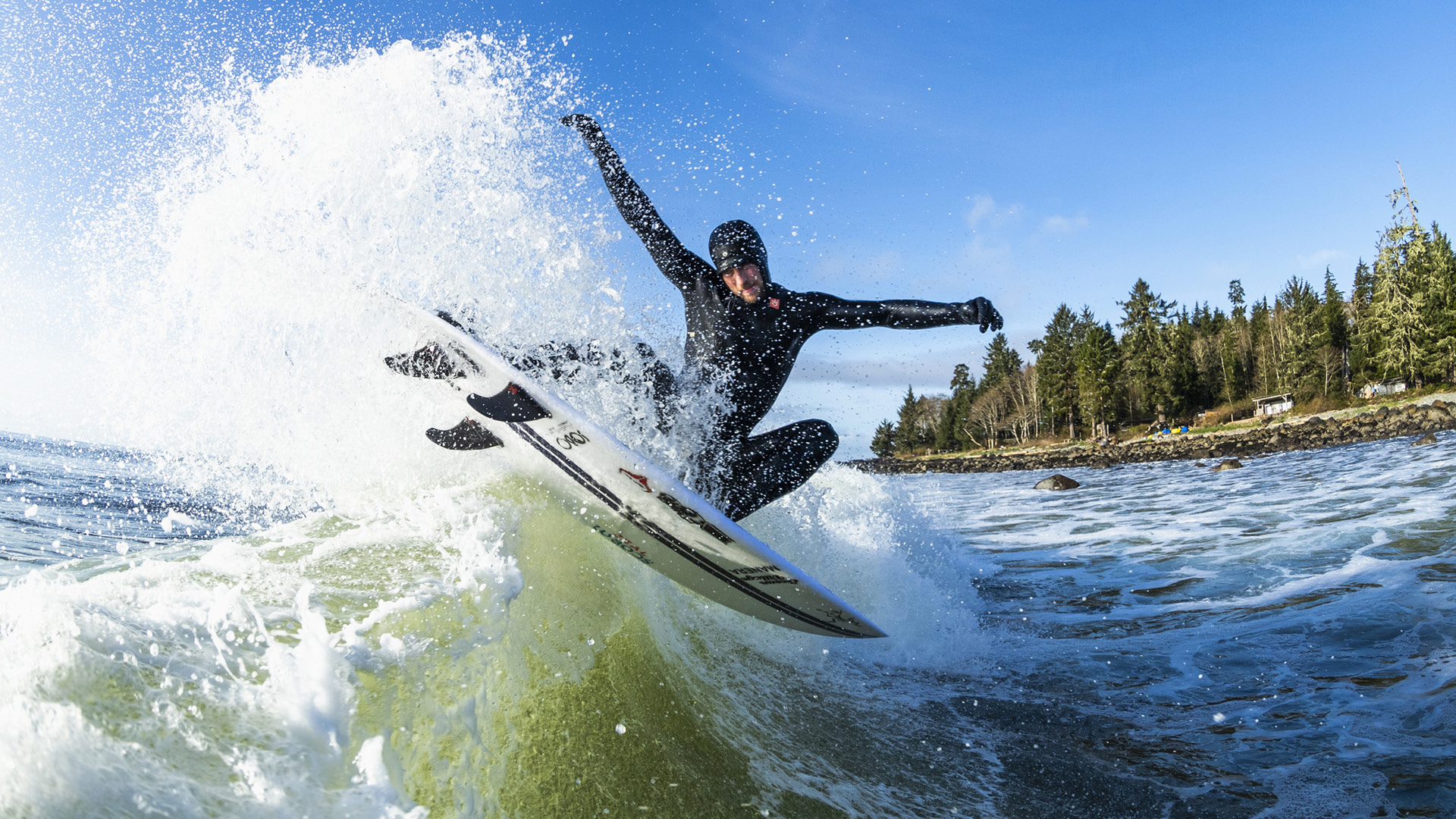 Pete Devries’ home smells like pine trees, woodsmoke and wet dog. Located on Tofino, B.C.’s ample waterfront, it’s a stone’s throw from where he grew up playing in the sand and watching his dad surf in front of their home on Chesterman Beach.

Devries, 39, has been shaped by these waters. When he won the Cold Water Classic more than 10 years ago, the Tofino streets were empty. Everyone, it seemed, was at the beach to cheer him on.

Before Devries, Canadians didn’t have a roadmap to professional surfing success. For the last 20 years, he’s been drawing the path that others are starting to follow.

“He set the gold standard of how to be a professional surfer in Canada,” says Dom Domic, executive director of Surf Canada.
“Everyone’s been modelling their career after Pete.”

Devries first hit Domic’s radar in 2000. Back then, Domic was working for Surf BC and was impressed with the then 17-year-old’s riding at a local competition.

“He was really young and going up against the big dogs,” recalls Domic. While Devries didn’t win, he was runner-up in a challenging field featuring other Tofino surf legend Raph Bruhwiler. “From then on, he was pretty much unstoppable… he went on a pretty lengthy tear.”

Devries solidified his presence in the surfing community on a crisp Halloween day in 2009. More than 100 top-ranked international surfers had descended on Tofino for the O’Neill Cold Water Classic Canada. It was the first time the competition was held in Canada and Devries, a wildcard entry into the event, was a relative unknown to the field.

On that bright autumn day, the pride of Tofino made his mark, winning the final to become the first Canadian to win an international surfing event.

Earlier in his career, Devries tried living out of his suitcase to compete in international surfing events. But prolonged life on the road was not for him. His son, Asher, now 12, was born shortly after his remarkable 2009 victory. The family, including wife Lisa, enjoy spending time on the water together—surfing, or paddleboarding in the inlet from their home at high tide.

“He’s a homebody,” says Domic. “His family is everything.”
Instead, Devries found another way: free surfing. Doing what Domic calls “strike missions,” Devries leaves home for a couple weeks at a time rather than months.

Competitions can help surfers gain sponsor attention but where Devries truly excels—and where he’s focused the bulk of his career—is in free surfing. It’s easily compared to free climbing, free skiing, or free snowboarding where athletes favour cool projects or challenges over competitions. They’re often accompanied by filmmakers or photographers who capture all the action.

Many of Devries’ trips—from Haida Gwaii to Iceland, or Chile—are documented and transformed into films or photo essays.

All of this requires Devries to be in peak physical condition.

“He’s not simply a really good surfer, he’s a truly elite athlete,” Malcolm Johnson, former editor of the now-defunct SBC Surf Magazine told Explore magazine in 2012. “The things he does in the water require an incredible amount of strength and balance and flexibility.”

Devries believes in everything in moderation. He walks his dog every morning along the beach, goes for coastal hikes with his family on the peninsula’s many trails, retains his balance and strength in a home gym and spends lots and lots of time surfing.

“I feel like consistency is the most important thing as you get a little older as an athlete,” says Devries. “Not too much, not too little. You can maintain and sustain.”

His off-water workouts are all about improving strength, but while balancing. BOSU ball movements feature heavily in his home-gym routine.

Also important, especially when the water is so cold, is the warm-up Devries performs before each surf session. He gets his joints—ankles, knees and hips—loosened up.

“Anytime you’re landing an air on water, you’ve got an unbalanced surface, especially once the wave is broken and it’s turned into whitewater,” he says, “so you’re always kind of off balance, even as you’re solidly on your board.”

While he has travelled extensively to warmer waters, and says it’s freeing to just surf in boardshorts, Devries always wants to come home to the cold. Widely regarded as being among the best cold water surfers on the planet, he’s the first Canadian to be featured on the cover of Surfer Magazine and is a stalwart ambassador of Vancouver Island’s west coast. While the images of Devries surfing capture attention, the temperatures keep most away. The waters off Tofino’s coast range from about 7 C in February to about 14 C in August.

In the winter, brave surfers bob in the water, thick neoprene hoods pulled tight. Their numbers multiply as the days grow longer and the weather less temperamental. Devries’ winter surf sessions last about 1.5 to two hours, and in the summer, they are
as long as eight hours—if the conditions are right.

Tofino’s waters aren’t even the coldest he’s surfed in.

Earlier this year, on the cusp of travel opening up, he and a group of buddies travelled to an island in the Bering Sea to chase waves. He’s also been to Iceland, which he describes as some of the coldest water he’s surfed in.

“In Tofino, once you have good wetsuit gear and you’re all sorted, it’s totally manageable all winter and then going to places like that [Iceland and Alaska], it’s kind of like a different level of pain in order to get out on the water,” he says. “The waves dictate how long you’re going to be out there. If it’s a long session, you’re absolutely freezing by the end.”

Devries grew up as a multisport athlete, taking part in basketball, floor hockey, soccer, baseball and tennis. He started skateboarding and surfing in his pre-teens and eventually transitioned to surfing as his full-time sport by age 16.

He’s washed dishes at a local bakery and sold boards at a local surf shop. When he got his first cheque from surfing at age 17, he realized he could make a career out of the sport he loved. But it was a route he had to blaze; for a Canadian, it had never really been done before.

“Surfing wasn’t really a thing in Canada,” says Reed Platenius, the 2021 national surfing champion who lives down the street from Devries. “The freak [Devries] is, he is so competitive and he just somehow made it a career for himself. I feel like if it wasn’t for him, a career path in surfing wouldn’t even be a thing in Canada.”

Why surfing? It was the most challenging of the sports Devries tried and he was enthralled with the variability.

“The weather systems are constantly changing. It just makes it so challenging,” he says. Surfers have a saying that you’ll never surf the same wave twice. “Everything’s always fresh.”

It takes a lifetime of experience to read the water and know the right conditions that will turn a ripple into a wave.

The coast holds secrets tight, but Devries has charmed it to share and he’s passing that knowledge on to the next generation of Tofino surfers.

“On the west coast, there’s so many different little nooks and crannies where there are waves. They require completely different swell directions, or wind directions, or tide,” says Platenius. “He’s been really generous to pass on that information.”

The missions to far-off, or remote locations alongside filmmakers and photographers are his bread and butter, and a specialty.

“He’s the hardest-working guy,” says Platenius, who has accompanied Devries on a few free surfing missions and has learned that a lot goes on behind the scenes of those iconic shots.

A few years ago, Devries and surfing pals sought remote waves at a river mouth on Vancouver Island. The terrain they tackled immediately after the helicopter drop stopped them in their tracks. They made 30 metres in 45 minutes, lugging their gear up a steep incline into the rainforest. Sun turned to rain and knee-deep mud. They hiked two hours in the dark to their camp, sleeping in wet gear until dawn. When they woke, they discovered they weren’t yet at the coast; a surfer’s false summit. On they hiked, and when they finally made the shore, they were barely able to paddle the currents due to the effort to even just get to the remote break.

Surfing in the wilderness also means that Devries is often away from the technology of modern life.

“Being able to get outside and get away from everything, it clears my mind,” he says. “I’m lucky to have surfing where you’re completely disconnected. If you’re running or biking, you can probably check your phone, if you get a message, get a ding. I feel very thankful to be involved in something where you have no choice but to disconnect and get away from it all.”

But he’s never gone for long. Tofino and his family call him home. His son Asher is a talented surfer, but currently prefers other activities like hockey. He’s getting close to the same age his dad was when he decided to surf full-time. If he decides to follow that route, he’ll have the next generation of surfers, like Platenius, and his dad, still leading the way, legacy in progress. 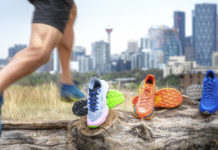