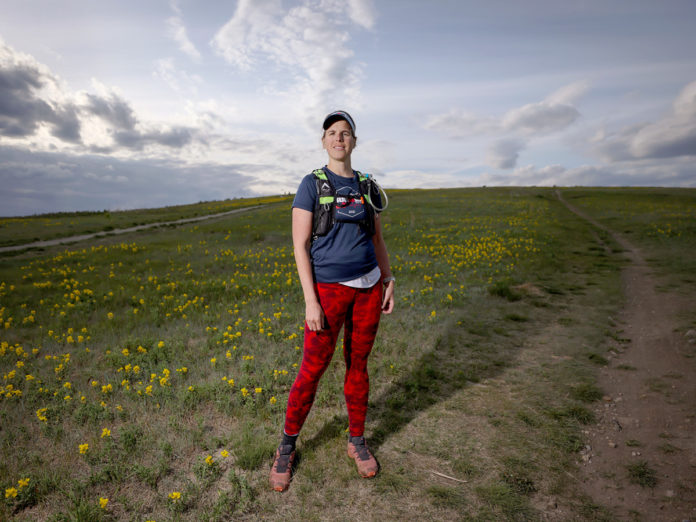 Deanna Thome is a Calgary-based ultra-runner who has run eight ultra-marathons and is training for her first full Ironman, having completed her first half-Ironman last year.

She also happens to have epilepsy, which she describes as “being drunk without the fun.” Like many athletes with health conditions that might have previously ruled them out of competition, Thome’s road – running and otherwise – hasn’t always been smooth.

Just her diagnosis, received after ten years of unanswered questions, was the opposite of easy. Her first inkling that her life was about to shift was a call from her neurologist.

“I missed the phone call, I happened to be at a kinesiology conference at the time. And when I listened to the voicemail, it basically said that ‘we’re advancing your appointment and we don’t want you driving.’… And I knew at that point that it was bad news.”

Thome first started having symptoms in her early teens, but that appointment, which coincided with her 27th birthday, presented new challenges. Sure, she no longer felt as if the symptoms like unexplained dizziness and fainting might be all in her head – a common problem perpetuated by a medical system where the average wait time for an epilepsy diagnosis on the prairies can stretch to almost 15 years – but also that she would have to navigate possible triggers.

“I started going on these new medications and started learning all the things I could not do, and I started running into barriers and questions about how my life was going to work.”

During that time, she says two main aspects of running appealed to her: freedom and community.

“I find that when I’m running, whenever I leave the front door, it’s not a structured sport. It’s not something where there’s a set of rules that I have to follow. I could go as far as I want; I could go as little as I want. And, when I’m out on those trails, it’s just me and the trails.”

Thome sees parallels between the barriers of running such long distances and her understandings of her conditions – she’s also been diagnosed with a psychogenic non-epileptic seizure disorder – including navigating life pre-and post-diagnosis. The same was true in her most recent race.

I heard a quote once that even if you fall on your face,
at least you’re moving forward. And I think that really stands out to me.

“During that ultra-marathon, I actually had one of those mental battles. It was kilometre number 21. I was starting to feel very tired; it was really hot out. Because I’ve been doing more training and running and such on roads, I underestimated some of the trails that were at the physical race. My left hip was starting to bother me, and it was all these things that were making me want to quit. And it was that same type of feeling that I get when I have a seizure.”

She says during the race, as she prepared to pass the starting line midway through on the looped course, she contemplated quitting.

“It’s very tempting during that time to just throw in the towel. But when you don’t, and when you’re able to push past that feeling, and you realize that at the end, when you cross the finish line that ‘I accomplished something that would have been very comfortable to quit.’ It was the same feeling that I got … every single time I learn[ed] something new about my own chronic health conditions.”

Thome says she’s found community with fellow runners being willing to run with her for a while as she’s managing the physical barriers that come with running such long distances.

“I find that in lots of ultra-marathons that it’s not about who comes first, who comes in last, but it’s about working together, basically, to get through a sport and get over an obstacle.”

In her journey from finishing her first ultra-marathon, a 2017 race where her husband labelled her a “last place champion,” – a title she relishes – Thome says that running has taught her self-care and awareness of her own needs. It’s also given her a fair dose of perseverance.

“I heard a quote once that even if you fall on your face, at least you’re moving forward. And I think that really stands out to me,” she says. “That whenever I have a setback, it’s just a way of stepping back and basically being able to see the bigger picture, learn more about myself, and ultimately, makes me a stronger runner at the end of the day.”