It turns out the quaint streets of Victoria, B.C. are secretly riddled with muscle-bound thugs, unicorns, dinosaurs and alligators.

Stephen Lund, 50, a marketing and advertising copywriter, uncovered what was hiding in his neighbourhood when he used the GPS device on his bike to “write” a Happy New Year’s message that he uploaded to the social GPS tracking website Strava in 2015. It wasn’t long before Lund discovered more messages, creatures and characters in the streets.

“The game changer was when, after a few rides, I sat down and traced all the main roads in Victoria in red on a map — that’s when the images started to pop out at me,” says Lund, including one of his favourite pieces, Garmina the Giraffe, which ended up going viral.

Last year, Lund logged about 5,000K and 800 hours creating 85 GPS doodles — everything from sea creatures to Star Wars characters to holiday-themed art. Each doodle takes between three to four hours and 70K of riding to complete.

“Creating GPS art is all about planning ahead of time,” says Lund. “I trace an image out on a map, then type out turn-by-turn directions to take with me to follow as I go.”

For GPS doodles where Lund has seemingly ridden through buildings and across bodies of water to create his masterpieces, he uses a technique he calls “connecting the dots” by pausing his Garmin and restarting it to create a straight line.

“The best doodles are the ones that are already there in the map just waiting to be found.”

“Some call it a cheat, but I call it an improvisation — an artistic technique,” says Lund.

If you’re interested in making your own GPS art, Lund suggests tracing out your route using a marker and a map or Google Street View and Photoshop, planning how to get around obstacles. Including going off-road. Write down directions for your route and bring it with you on your ride.

Before doing that, however, Lund suggests taking a closer look at your hometown streets to see what might be hiding in plain sight.

“The best doodles are the ones that are already there in the map just waiting to be found.” 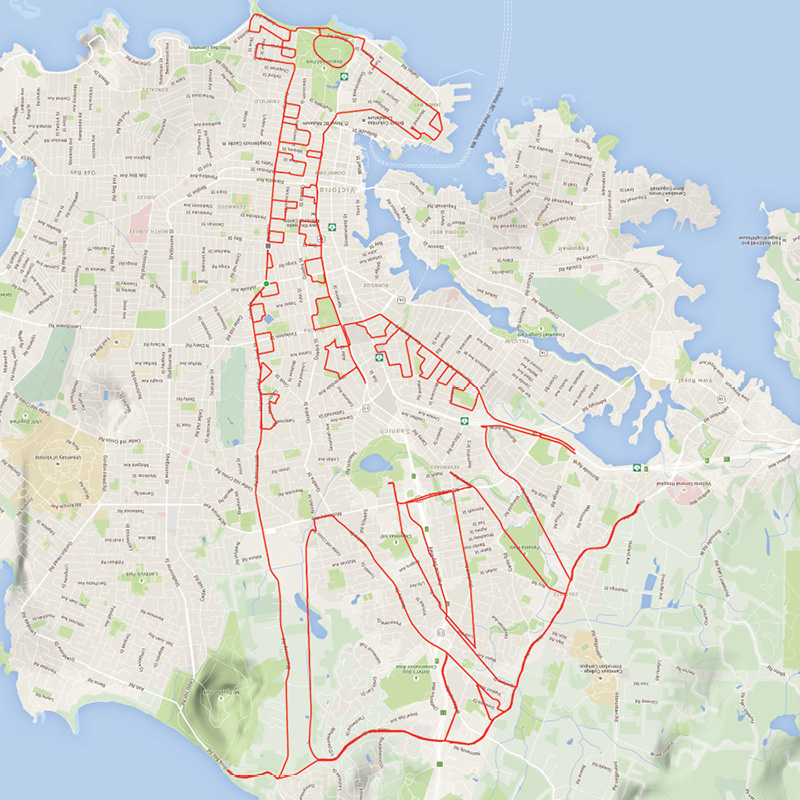 “Garmina the Giraffe” by Stephen Lund