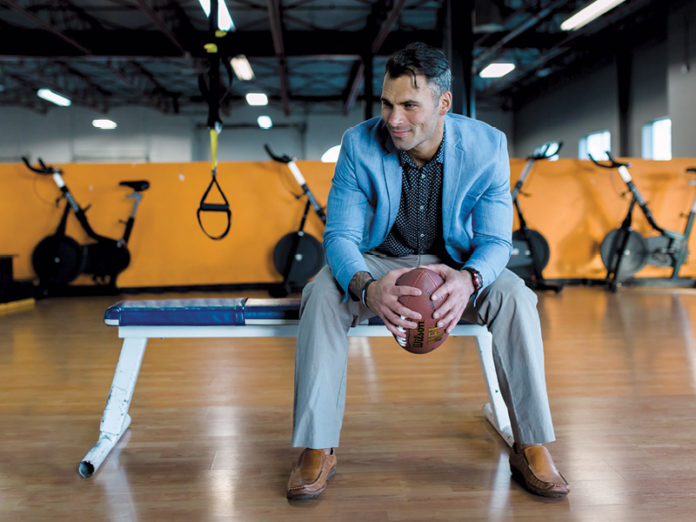 Scott Salling thought he was dying – but his new life was just beginning.

A college football star at UBC and a budding pro athlete, Salling fell ill during a 2009 tryout with the Canadian Football League’s B.C. Lions.

Salling’s weight dropped rapidly from 200 to 130 pounds, ending his dream of playing pro football. But, ultimately, the setback turned him to a career in fitness where he helps others reach their health goals.

Salling was diagnosed with ulcerative colitis, a debilitating inflammatory bowel disease that affects the colon and rectum. He was prescribed several medications, including Prednisone, a common corticosteroid. But his health wasn’t improving and the only demonstrable results after several months were hair loss and a severe case of acne. So Salling told doctors he wanted his colon removed.

First, Salling, had to boost his weight and iron levels. He hit the gym, but could barely lift a bar with no weights – this from an athlete who could once bench press 310 pounds.

Following a modest improvement in his condition, Salling had his colon removed on Dec. 23, 2010.

“It was a risky move,” says Salling. “I think a lot of people are just scared to do it, which I understand. I guess it was desperation to get healthy that prompted me to do it.”

Due to infection and other complications, he underwent two more surgical procedures. Then it was back to the gym.

“I personally always had faith I was going to beat (colitis).”

Steadily, he increased his bench press loads and saw his aerobic capacity improve.

Salling became a certified personal fitness trainer, strength and conditioning specialist, and sports nutritionist. After working with other trainers for a few years, he ventured out on his own in 2016 to launch F.I.T. Academy in his hometown of Port Coquitlam. Aged 14 to 80, his clients compete in various sports, including soccer, baseball and basketball – but none play football.

Initially, Salling hid his illness from family, friends and former teammates and coaches. But now he shares his story to help others tackle their medical challenges and achieve their fitness goals. Tattoos on his chest of a Koi fish, which symbolizes adversity, and another that says humility and a scar on his mid-section commemorate the challenges he has overcome.

“It’s definitely opened my eyes to what I want to do – without any question,” says Salling. “I think I’ve found, through that, my way of giving back and helping.”