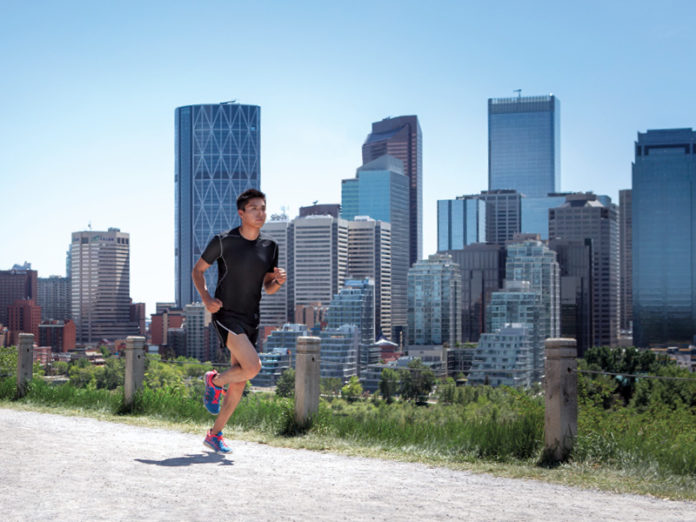 To him, it seemed like a big game of tag. He didn’t want to get caught, so he ran hard.

This had been Rilee ManyBears’ imaginative strategy in his first-ever race, 800 metres in Grade 5.

“I basically sprinted two laps and I won,” recalls ManyBears. “That was my way of being introduced to track and field.”

His attire, however, left a bit to be desired that fateful day in Duchess, Alta. – long jeans and skateboard shoes.

“All the others had really nice apparel – running shoes, running shorts,” says ManyBears, who’s from Siksika Nation, a Blackfoot settlement an hour east of Calgary. “I just looked like a clown. But when the gun went off, I was in the moment.”

Now – a dozen years later,state-of-the-art running gear in his closet – ManyBears is a full-fledged racer. One with a scholarship offer from Bacone (Okla.) College. One with Olympic aspirations, thanks, in part, to the legendary Billy Mills, a member of the Oglala Lakota Sioux tribe, who won the 10,000 metres at the 1964 Games in Tokyo. The underdog’s triumph – “Oct. 14, 1964, he shocked the world” – resonates with ManyBears, 22.

Flashing his own potential as a youngster, he had often been told that he could be the next Billy Mills. “I’d be, ‘Who’s that?’ So I researched him and became a fan.”

But the journey has not been easy. Two days after graduating from high school, ManyBears’ dad died. That tragedy, June 27, 2013, drove him to substance abuse and depression.

Soon after, ManyBears was invited to the 2014 North American Indigenous Games in Regina. He won the 3,000 metres – his first race in more than a year – and his comeback was alive.

“It was, ‘I miss this feeling. It’s way better than drugs and alcohol,'” says ManyBears.

A year later, he captured the 8.4-kilometre event at the World Indigenous Games in Brazil. A billboard in his honour was erected near the Siksika townsite.

Along the way his relationship with Mills evolved – from idol to mentor to friend. Last year, he spent a night at the gold medallist’s home in Sacramento, Calif., and got to pull on his Olympic outfit – Mills’ shorts and singlet.

“That was like trying on a Michael Jordan jersey or a Wayne Gretzky jersey.”

If Mills is his inspiration, running serves as his salvation.

ManyBears is more than two years’ sober. He is proud of that.

“One of my huge accomplishments – being a drug and alcohol-free aboriginal youth,” ManyBears says. “It is really common in First Nations communities that youth are into addictions. I want to break that stereotype.