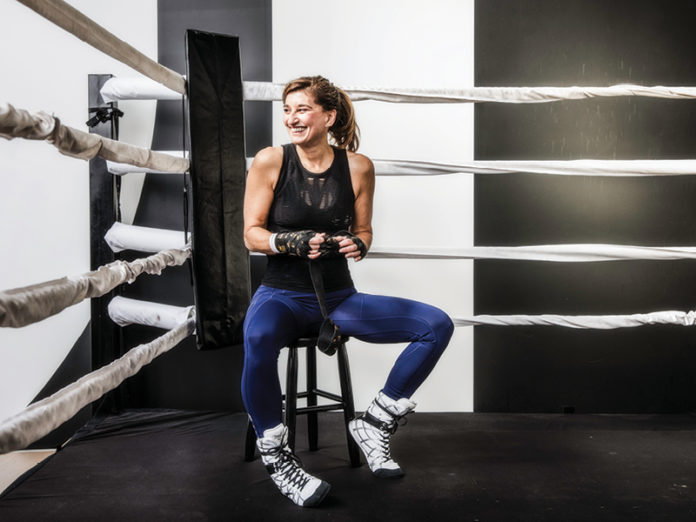 As the CEO of Gabriella’s Kitchen and president of a successful investment firm, Calgary entrepreneur Margot Micallef has made a career out of negotiating deals. But, when it comes to her morning routine, it’s not negotiable.

“My alarm rings (at 5 a.m.), I hop out of bed, and I make my bed immediately so there’s no thought of jumping back in,” laughs the 58-year old fitness enthusiast, who hits the gym for two hours every morning.

In 2009, Micallef and her sister, Gabriella, launched skinnypasta, a special brand of healthy low-carb, high protein pasta. The Italian sisters wanted to take pasta off the “banned list” for fit foodies. When Gabriella passed away from cancer in 2012, Micallef used exercise as a way to cope with the loss of her sister, business partner and best friend.

“I was going to the gym two to three times a day and every time I felt sad, I would go for a run, do weights or go boxing,” she says.

She was hooked. A disciplined fitness routine, which today includes three yoga sessions and two boxing workouts every week, is scheduled with the same importance as a business meeting, gaving her a hit of “happy hormones.” It helped her work through her sadness, and renewed her passion and direction for the company, which she renamed Gabriella’s Kitchen in honour of her late sister.

Micallef, a lawyer and philanthropist, is founder of Oliver Capital Partners and a former senior vice-president at Shaw Communications. She serves as a board director of Alberta Ballet, CanWest Global Communications and the power company Enmax. She has grown Gabriella’s Kitchen  to include 25 different pasta products which are sold at almost 2,000 retail locations in Canada.

Micallef’s true grit became evident in the boxing ring. She almost backed away from a charity boxing match after being punched in the head during a sparring session six weeks before the event.

“It was the first time I’d ever been hit by another person and I found it utterly overwhelming… I had tears in my eyes and felt completely vulnerable,” she says.

She continued working with her coach to build up strength, defensive skills and mental stamina, and overcame her fear of the ring. She lost the match, but still calls it an “amazing experience.”

On winter weekends, you’re likely to find Micallef skiing and when pavement is bare, she’s cycling. She recently completed a five-day cycling tour of Sicily with her partner and two friends, all ranging in ages from 55-62. It’s proof, she says, that we can still be “super fit and ageless.” She plans to ride the Palo Alto Gran Fondo next spring.

Sometimes, Micallef can’t believe how far she, and her company, have come.

In the early days, Gabriella was making pasta in the back of a small storefront in Calgary. Last year, their skinnypasta was served at an event hosted at the Vatican.

“Can you imagine… the Pope’s chef is making our pasta? Amazing… (Gabriella) would be elated!”