Kayaker Finn Steiner challenges his body and feeds his soul while paddling extreme distances on the open ocean.

The Victoria, B.C. native became the youngest paddler to circumnavigate Vancouver Island in a kayak this past spring at the age of 17. He pursues his passion with an abiding reverence for First Nations paddlers who traversed these waters centuries ago.

“They used to hunt whales in 30-man canoes,” he says. “Who knows, there might have been a kid younger than me who paddled around the island 500 years ago. They were amazing people.”

Steiner ignored those who told him he was too young to tackle the demanding route and went out and got it done. The 39-day, 1,200-kilometre trip involved six hours of daily paddling for an average of 30 kilometres a day. He burned around 4,500 calories a day and dropped 17 pounds from his six-foot-two, 210-pound frame.

The son of “pretty active and adventurous” parents, Steiner grew up in Victoria and at an early age was mountaineering and rock climbing, with hockey and skiing filling his winters.

He used an 18-foot British-built kayak for this trip. “It’s very thin for speed and deep enough to hold the gear I needed,” he says. A GPS equipped with satellite messaging allowed him to co-ordinate supply drops around the island, monitor weather and stay in contact with the outside world. 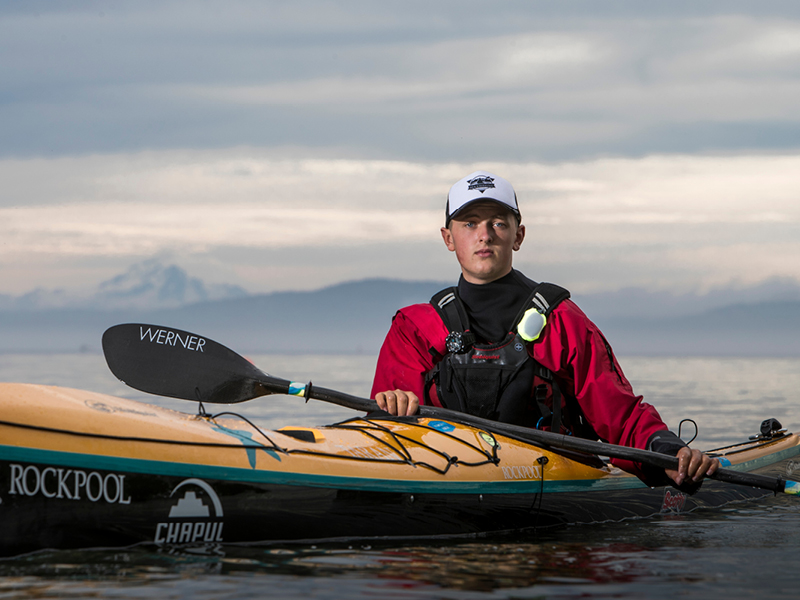 Steiner took on the challenge to test himself, but also to show people of his generation they can accomplish things they never thought possible.

“Take on challenges, even hard ones,” he says. “Get out there, put in the work and believe in yourself; you’ll be amazed at what you can do.”

One scary moment came near the end of the trip when he opted to save some time by taking an inside channel around Tatchu Point on Nootka Island.

“I looked up and saw about 10 feet of water in my face. It picked me up and dropped me upside down. Then I got hit with another 10-footer. There are a lot of teaching moments in a sea kayak. The ocean really humbles you.”

Steiner, who works as a kayak guide, says a sea kayak is a fantastic way to see some amazing marine life and experience what he calls “wow moments.”

“We’ll see 30 humpback whales, orcas and pods of dolphins on a single day. The look on the faces of the clients, it never gets old.”

And Steiner already has his eye on another challenge — a paddle around the Caribbean island of Jamaica.

“Yeah, I’ll trade rain and bears for hot weather and sharks. It would be quite a challenge.”

We couldn’t be prouder of you Erica, Canada’s