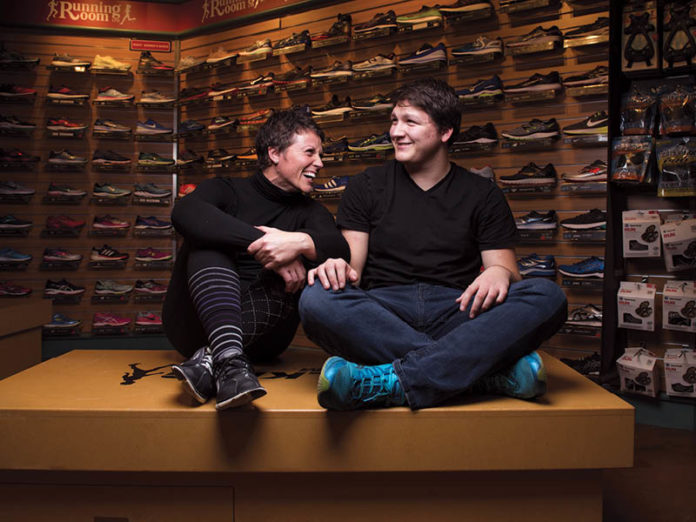 Char Hoyem will run the 2018 Boston Marathon as an ambassador for the National Braille Press as a tribute to her blind son, Tait.

Running has opened Char Hoyem’s eyes to a world of possibilities she once considered far out of sight. Weighing more than 300 pounds, Hoyem put her foot into a fitness program one step at a time, first walking then counting each stride of her walk-run efforts.

Now an accomplished ultra-marathoner and run group leader who is literally half the woman she was, those 100 strides from a few short years ago pale in comparison to the 100-mile efforts she has raced in events such as the Lost Soul Ultra in Lethbridge, Alta., or her Calgary Marathon finish in 2015. She doesn’t finish ahead of too many competitors, but she never quits. “Speed is not my thing — though I’m lightning fast compared to where I started — but I can run far.”

“When I walked into the Running Room for that first half-marathon program, I was still 250 pounds. Now it’s kind of cool to be on the other side. If something feels so big or so far away, it’s not,” she says. “It’s not impossible. It’s just normal people. They can run ultras and marathons, too.”

Hoyem is filled with gratitude for what running and life has given her.

“I’ve raised my kids to believe we owe it people to contribute more than we ever take,” says Hoyem. “My running family welcomed me when it took me 58 minutes to run 6K. They told me that I belonged and helped me understand we all belong.”

Hoyem has a special race on tap this April, running the Boston Marathon as an ambassador for the National Braille Press, a literacy non-profit for blind people. Her intention was to race blindfolded with a guide runner, as a tribute to her 18 year-old blind son, Tait, but marathon rules will likely limit her to a 5K race before Boston’s main event.

Tait Hoyem takes online courses in computer programming through the University of British Columbia and Curtain University in Perth, Australia. He has limited vision, but few limits. He has also dabbled in trail running.

“Running changed my life. Yes, it changed my body, but it changed my heart and mind. The weight loss was a side effect,” says Char Hoyem. “I’m not the kind of runner who would ever qualify for Boston. I can do great big long runs, but I do that because I’m slow … slow can go pretty far sometimes.”