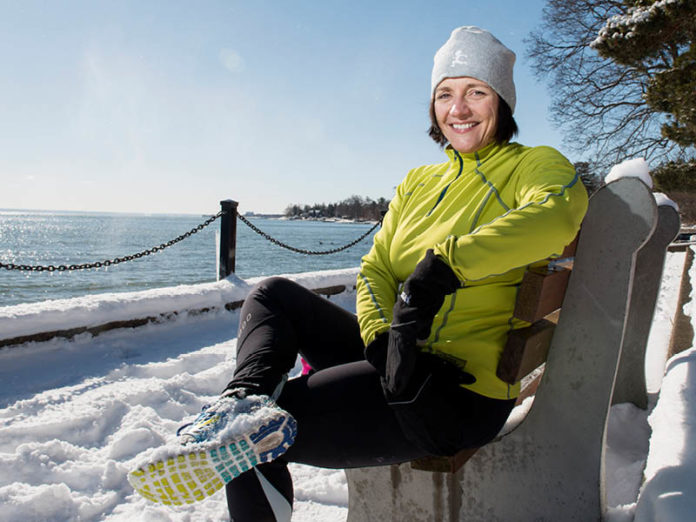 Cari MacLean savours a winter run on the shores of Lake Ontario near her home in Oakville.

Every time Cari MacLean laces up her shoes, she gives thanks for running.

MacLean, the wife of Hockey Night in Canada host Ron MacLean, suffered a near-fatal pulmonary embolism during marathon training in 2012. Running helped save her then and it continues to help her thrive today.

“I am alive today because I am a runner,” says MacLean, 55. “A P.E. as massive as the one I had typically does some lasting damage — if one is lucky enough to survive. My cardiologist is convinced my strong heart and lung system gave me the time needed to save me.”

Eight months after the incident, MacLean laced up and slowly began returning to the sport that had helped save her life. She has since completed the Toronto Women’s Half Marathon and the Chilly Half in Burlington. Now coping with “normal” running injuries in her glutes and hamstrings, MacLean says “I’m pretty sure my days of running halfs are and fulls are over.” She plans to run the Melissa’s 10K this year in Banff, Alta.

And she’s OK with 10K. Because her entire life changed that day, not just the way she exercises.

“I am more observant as a whole,” she says. “My runs give me an opportunity to stop along the way, breathe deeply and say a little prayer of gratitude.”

The couple of races a year MacLean registers for now are good for structure, helping to keep her admittedly less-regimented running schedule on track, but she’s trying to be kinder to her body.

“I am also perhaps not so hard on myself,” she says. “If I don’t feel like running up a hill, I don’t. If I am under the weather, I’ll curl up with a book instead.”

The reasons to run, and the act itself, have changed for her. Running now means something different. Luckily, the sport has the ability to change like that. Running can mean a thousand different things to a thousand different people. Take her husband, Ron, for example, who prefers to run alone (barring the occasional vacation or Christmas morning outing).

“It’s his time to unwind, think, compose work ideas,” says MacLean. “No talking, no chit chat. He gets enough of that on a daily basis.”

To each his, or her, own. What’s important is that it’s enjoyed. And you can bet that when Cari MacLean crosses her next finish line, she’ll be smiling, grateful for each kilometre underfoot and the many more still to come.