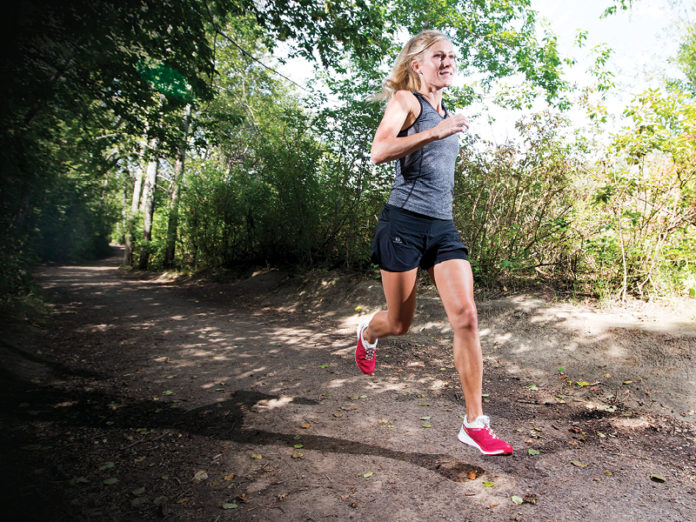 Sometimes it catches her off-guard. To scan race forecasts and discover her name nestled among the favourites.

“It’s still really bizarre to see me in the mix,” says Alissa St. Laurent, who, in name-making fashion, won the 125K 2015 Canadian Death Race near Grande Cache, Alta., outlegging a field of 327, including all the men. “I still feel so new at it.”

An understandable sentiment, given the Edmonton resident’s rapid ascent within the ranks of ultramarathons.

It was only six years ago St. Laurent dared to make the leap from social runner to marathoner. She finished her first crack at the 42.2-kilometre distance, “But I did suffer by the end.” A year later, 2012, she entered – and won – her first ultramarathon, a local 50-kilometre event.

She laughs. “That started it.”

St. Laurent is a recognizable commodity in the niche sport, earning invitations to events in France and New Zealand.

“I didn’t go into this with any sort of expectation, other than trying to push the limit,” says the 32-year-old. “To be competitive quite quickly was a surprise. It’s taken a long time to wrap my head around it.”

Moreso because St. Laurent, growing up, was never considered athletic. At junior high in Mountain View, Alta., her tiny home town near Waterton Lakes National Park, she “tolerated” playing team sports. In high school, she did not compete in anything.

Credit remarkable mental toughness for catapulting her into the ultramarathon’s upper echelon.

“To talk yourself out of stopping when you’re suffering is pretty huge,” says St. Laurent, who’s studying acupuncture at MacEwan University in Edmonton. “You’re always going to get to those points where you have to pull yourself out of a dark spot.”

Typical are running weeks of 160 kilometres, plus weight training and yoga sessions. St. Laurent is known for solo jaunts, up to eight hours on mountain trails. In her backpack, she carries water, dried fruit, almond-butter-smeared tortillas, salt-and-vinegar chips.

“I love those days, for sure,” says St. Laurent, five-foot-five. “I’m a big introvert. I like my space.”

So imagine her reaction in the aftermath of that outright victory at the Canadian Death Race. The spotlight found her.

“I didn’t always appreciate the recognition for it,” she says. “It was lost on me.”

Now she gets it.

Stepping up for women-empowering platforms, St. Laurent participated in a speakers’ panel at the Victoria Marathon in October. This summer she hosts a women’s weekend retreat in Nordegg, Alta.

“It’s cool to be a part of it, to bring attention to it,” she says. “As much as I’m uncomfortable in that position, I’m embracing it, using it to promote our sport, which is awesome.”