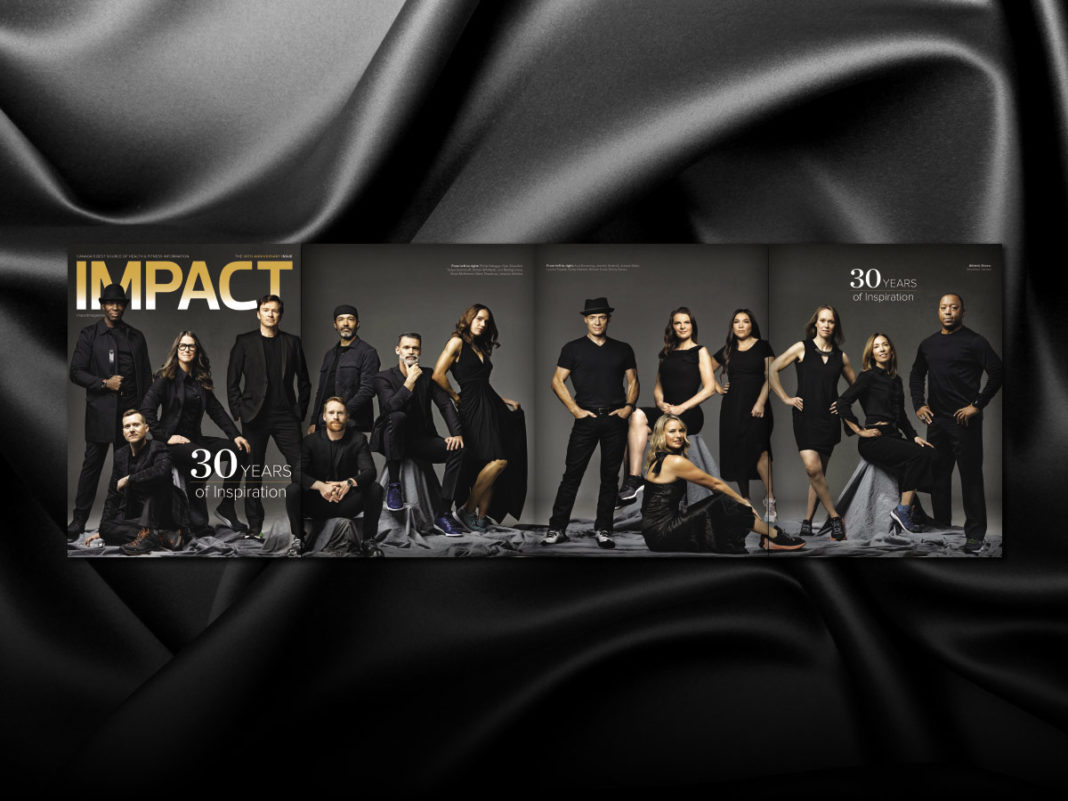 Since 1991, IMPACT Magazine has been about inspiration. From the workouts to the feature stories, from the recipes to the Final IMPACT editorials, every word and picture has been designed to inspire our readers to live their best life. And nowhere is that inspiration more evident than on IMPACT’s front cover for more than 180 issues where we have been allowed to share the faces of some of the world’s most amazing athletes and personalities.

From the legendary feats of Terry Fox and Rick Hansen; to wrestler Bret Hart and speed skater Catriona LeMay Doan; from triathlete Lisa Bentley to mountain runner Kilian Jornet; from chef Gordon Ramsay to tennis GOAT Serena Williams; they are all in amazing company as IMPACT Magazine alumni.

You can find their faces and every other IMPACT cover personality in this feature. And while we highlight 15 personalities in print this issue, five from each decade of IMPACT, you can catch up on the whereabouts of dozens of other IMPACT cover athletes and celebrities at impactmagazine.ca.

World champion Kurt has chased his dream of the spotlight and the bow at the end of a skated program ever since IMPACT clicked his photos in 1992. And he still goes to the rink on a regular basis and chases that spotlight. He has hosted many figure skating shows and worked with different networks giving commentary on skating. He’s an actor, starring in 50 live performances of Peter Pan at the Elgin Theatre.

Developing an adult skating program. Recovering from a hockey injury, Kurt discovered isometric exercise through inventor Brad Thorpe’s Isophit program and has made it the fundamental part of his fitness routine. He backed up his belief in the program by investing in the company and regularly working with the Isophit team.

Do for a living as an adult what you did for fun as a child. – Kurt Browning (via his father)

The 1992 gold medal backstroker went on to be Chef de Mission for Team Canada at the London 2012 Olympics. With colleague Debbie Muir, he is a leadership coach and has been a champion for LGBTQ+ rights since coming out as the first openly gay athlete in 1998. He’s been a Special Olympics Board Member for 12 years; Vice President of the Canadian Olympic Committee; Muhammad Ali Humanitarian Award recipient in 2019; Companion of the Order of Canada in 2020. And he wrote and stars in a one-man show, Belong.

“For my acts of rebellion and outing myself, I might have had the Companion of the Order of Canada rank taken away 20 years ago; today they recognize me for it. I did everything against the institution; the first to come out and speak openly about being gay in sport in 1998 and against IOC and sport leadership in 1998; supported the Gay Games in 2000s and people with intellectual disabilities via Special Olympics from 2009 until now.”

If not you, then who? Someone has to be great. Why not me? – Mark Tewksbury

Bring out the best in those around you. – Jennifer Botterill

Joanne is a Commonwealth Games champion and World Champion swimmer who retired in 2005. She’s a motivational speaker, health and fitness TV personality; CTV/TSN Olympic broadcaster and holistic nutritionist. Married to Delano Ducheck, they have four sons, ages 14, 12, 8 and 4 (plus two international students). She works as Recreation Supervisor for the District of Summerland.

“Athletes often struggle with life after sport. I was no different switching gears in life and finding a path that was as fulfilling. Learning not to judge myself based on a world rank, my body composition or notoriety. I found a place where a mother of four enjoys the freedoms and beauty in nature with my family, in the lake or mountains or my backyard. I’m so proud of my past, my accomplishments, but for all those who strive to be No. 1, it’s not a state of eternal happiness or success. Who you are on the inside and your self-worth must be known and appreciated beyond those external labels.”

Cindy retired from speed skating in 2013 as Canada’s most decorated Olympian with 6 medals. She joined the Calgary Police Service as a constable in 2015. Married in 2018, Cindy had a baby daughter in 2020 and is now a stay-at-home mom. She was Manitoba coach at the 2019 Canada Winter Games and works with Speed Skating Canada in their Female Leadership Pilot Project.

“I entered university right after high school in 1997, the year I started speed skating. Skating thrived and I put my studies to the side in 1999. Fast forward 15 years, I started working, went back to school, and a full 20 years after I started university, I finally finished my degree in 2017. It is never too late to finish what you started!”

She is the founder and CEO of Spirit North, an organization working to improve the lives of Indigenous children and youth through the transformative power of sport and play. Now working across six provinces, and reaching over 6,000 Indigenous children and youth annually, Spirit North is recognized as one of Canada’s leading sport-for-social-development organizations.

“I am inspired by the great social movements of our time; by the ideals of equality, fairness and opportunity for all, and by the notion that every day I join a global collective community of individuals working hard to make change for the better.”

The 2004 Olympic gold medal gymnast retired after his final Olympics in 2008. He opened Kyle Shewfelt Gymnastics in 2013 and has covered four Olympic Games as a broadcaster. He has a new book titled Make It Happen — My Story of Gymnastics, the Olympics, and the Positive Power of Sport.

“I am inspired to get kids active and to share positivity and joy with my community!”

The 2000 Olympic triathlon champion was Canadian flagbearer at the London Games in 2012. Simon retired from professional sport in 2013 and is involved in several business ventures — Velofix Mobile bicycle shops, Relentless Pursuit Partners, and 4iiiis.com. He plays over-40 rec soccer, coaches at b78 coaching with Jasper Blake and is an accredited Paddle Canada guide at Nimmo Bay Wilderness Resort.

It has always been the regular state of things. There is no clarity, no relief. At the end of all rationality, there is simply the need to decide and the faith to live through, to endure. – Simon Whitfield (via Ken Liu, The Paper Menagerie and Other Stories)

The beer drinking gold medallist at Vancouver 2010, Jon is host of the Amazing Race Canada. He’s married to former skeleton teammate Darla Montgomery. They have two kids and are building a life and health and wellness businesses on Vancouver Island.

“My interests are in sharing knowledge and experiences pertaining to personal health ownership and leveraging the power of pure, healthy, basic inputs to support our complex biologies with the best tools and practices to regenerate and ultimately make healthy copies of our 70 trillion cells — the hallmark of a potent regenerative system, of which we are the ultimate in complexity.”

“Resilience is not about overcoming adversity, it’s about facing it — head-on and pushing through to finality, regardless of the outcome. Wins and losses are not measures of resilience, rather, efforts and repeated attempts to overcome are the hallmarks of a resilient mind and attitude towards personal evolution and development.”

A 2007 Pan American Games champion and double silver medallist at the Commonwealth Games, the star heptathlete and hurdler is head coach of University of Calgary Dinos cross country and track and field teams.

“Major sporting events inspire me, whether I’m participating as an athlete, a coach or a spectator. Having people gather from all corners of the world to celebrate sport is truly extraordinary.”

Geroy retired in 2013 after winning his third Grey Cup as a receiver with the Saskatchewan Roughriders. He is now Director of Global Scouting with the B.C. Lions. He hopes to work towards a leadership role on a CFL team, such as General Manager or President.

After failing to make a pro team eight times, Geroy persevered and caught 1,029 passes for a record 16,352 yards to become a CFL Hall of Fame inductee.

Lauren’s second cookbook, hot for food All Day: Easy recipes to level up your vegan meals is an international and Canadian bestseller. Lauren moved to Los Angeles to escape Toronto winters and is working on a members-only platform as an extension of her EAT IT by hot for food blog to get more access to her epic recipe creations.

Never stop growing and expanding and if you notice fear around something in your life, that’s an even bigger invitation to pursue it and just do it. – Lauren Toyota

With 40 Paralympic and world championship medals, the visually impaired skier is preparing for his sixth and final Paralympic Games in Beijing in March. He’s looking forward to having time to heal his body after a lifetime in cross country skiing. He hopes to coach more and learn more about the waxing business.

Brian started skiing at age two and suffered progressive vision loss starting at age 18. At Vancouver 2010, he made the Olympic and Paralympic teams. His vision continues to degenerate.

Barriers are only obstacles if we allow them to be. – Brian McKeever

Philip is an extraordinary trainer and humanitarian who whips his Canadian clients into shape while devoting countless hours to his Ssubi Foundation which raises funds to support education initiatives in his native Uganda. With gyms closed due to COVID-19, Philip pivoted to virtual training via Zoom which proved to be a great success.

Having a passion is the greatest gift of all, especially when you’re living it. – Philip Ndugga

A 30-Year History of Covers with IMPACT