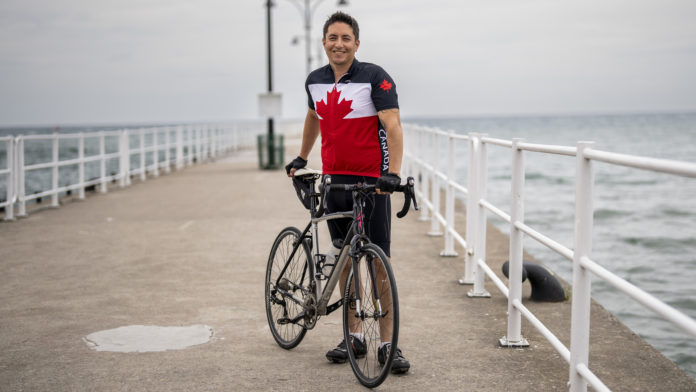 Of all the nuisances Chris Cull encountered while cycling from coast to coast across Canada, it was the horse flies of Northern Ontario that proved the most irritating. Worse, he says, even than the filter of mosquitos that adheres itself to the vast Canadian prairies and which he also pedaled through. Twice.

“I ascertained that if I could keep above 27 km/h I could outrun them,” he says, “But then you look and see the hill up ahead and you know you’re screwed.”

Cull has developed a certain expertise in highway entomology during his travels, but that’s not why he’s out there. The 37-year-old Ontario native first rode across the country from Victoria, B.C. to St. John’s, NL in 2014 following a years-long struggle with prescription drug abuse, chronicling his journey and the conversations he had with those impacted by the prescription-drug epidemic across Canada along the way in a feature documentary called Inspire.

Cull fell into a pattern of using prescription opioids while living with his father who was suffering from Huntington’s disease and who eventually took his own life. “It was just this pattern of not knowing if you were coming home to the worst day of your life,” says Cull, recalling the tumultuous time when his father would make repeated attempts at suicide amidst heavy drinking. “And that will take its toll on anybody.”

Cull says he spent six figures on pills in the two years following his father’s death in 2007, allocating every last bit of his money to feed the addiction. He hung blankets over the door frames in his house to keep the heat in certain rooms and boiled water on the stove to clean himself when the gas and heat were shut off. “I lost everything that meant anything to me,” he says. “I lost my girlfriend of three years that I loved dearly at the time, I lost the house my father left me…and then finally after I lost his house that we lived together in, I figured out I needed to do something.”

Following a confrontation with a customer at the big-box retailer he was working at, Cull broke down and ended up writing his passions and hobbies on a piece of paper. That’s how he came up with the tentative plan to change his life by getting back to the things he loved: namely exercise and travel. Less than two years later, a recently sober Cull travelled with his bicycle to the other end of the country, saddled up next to the Terry Fox statue in Victoria, B.C., and began to pedal east.

The epic journey was meant as a way for him to meet face to face with other individuals struggling with prescription-drug addiction, or their families, and to better understand the challenges facing Canada as a nation. He also planned some bucket-list events along the way, like skydiving out of a plane over Montreal or hitting golf balls off a mountain in British Columbia. What he didn’t plan on was the ride to lead to public speaking opportunities, or consultation positions on multiple government bodies, but that’s where he wound up.

Since his ride, Cull has advised a number of national institutions and organizations focused on the treatment of substance misuse, including the Canadian Minister of Health, the Centre for Addiction and Mental Health, and the National Advisory Council on Prescription Drugs. He also currently serves on the Board of Directors of the Canadian Centre on Substance Use and Addiction.

“Most of us know somebody who struggled with addiction and it’s very easy to kind of judge it as some kind of moral failing,” says Cull, describing the perspective he brings to his various positions. “But realistically, sometimes it’s a result of some trauma as it was with me. And you know what? It doesn’t mean that they’re a moral failure of any sort—they’re sick and they need help.”

He made such an impact on his first journey, in fact, that two years later, he decided to do it again.

“The bottom line with my second ride was I felt I could do a better job and reach more people,” explains Cull. “The other side of the coin though is I simply missed the adventure of the journey. It’s an epic experience being in a new place every day, not knowing who you’ll meet, and having productive discussions on issues I’m passionate about. It’s living the dream to me.”

This year Cull plans to do the bulk of his work off the bike and pedal mainly for fun and fitness. You can follow his ongoing journey on Instagram and Twitter @inspire_canada.