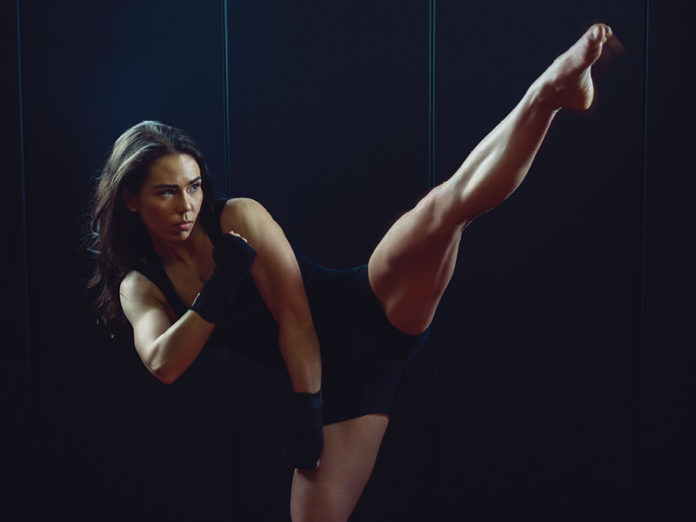 Lin MacMillan’s fists have often landed her in a heap of trouble. Now her hands – and feet – are helping her find a new path forward in mixed martial arts. MacMillan says fitness, bodybuilding and martial arts pulled her out of a dark place.

MacMillan, 29, grew up in a rough-and-tumble environment in Parry Sound, ON, a community she says was tainted by “a lot of drugs – (I was) always running into idiots at the bar.” A playground accident at the age of 10 left her with a brain injury that impaired her ability to walk and speak. She was bullied and teased at school and on the playground while receiving little support from family at home. The million-dollar insurance settlement issued for her care was misused by her parents.

“People would make fun of me and it got to the point I couldn’t turn the other cheek. By grade 10 I had enough and snapped. I just started (literally) fighting back and never lost,” she says. “No one could match me in physical strength and speed. No one picked on me again.”

In her early 20s, she was diagnosed with stomach cancer. To help with her recovery from cancer, MacMillan began hitting the gym, lifting weights much heavier than her 120-pound, five-foot-three-inch frame and getting fitter and stronger. Her out-of-control lifestyle resurfaced often over the next decade.  “I’ve had more street fights than I could ever count – 50 plus. Got arrested once, too.” she says, describing an after-midnight encounter with a man who tried to punch her in the face during an argument in the street. “I reacted and slugged him in the face five times,” with a couple hundred people watching the spectacle.

In 2016, she left small-town living for Toronto and discovered her current tribe that has been nothing but supportive of her journey. She became a personal trainer and began studying the finer points of martial arts with the goal of making her ring debut in a fight that includes a referee. With amateur MMA fighting banned in Ontario, MacMillan has her first fight scheduled for September in Trinidad.

“I’m not going to live my life on ‘what-ifs.’ Even if you haven’t had a brain injury, there’s always a chance that something could happen,” she says. “I’m very confident that I won’t get hit – I’m too fast and too strong.”

“I can’t imagine a day in my life not doing what I love to do,” she says. “There is no obstacle I can’t overcome. Sometimes life knocks you down, but I’m not the kind of person who gives up.”